1. An iPhone 6 box insert has leaked, is probably fake

We saw what claimed to be the iPhone 6’s retail box a few weeks ago, and the consensus seemed to be that it as a very clever fake. Well now what is claimed to be an insert from the phone’s box has appeared, and it definitely looks like a fake. Nowherelese.fr posted the picture, comparing it to the insert from the iPhone 5S to try and ensure its legitimacy. The problem is that the two inserts are nothing alike. For starters, the “iPhone 6 insert” shows off a minimalist lock screen, whereas the iPhone 5S insert actually showed off the home screen. It also displays the 9th September date which is widely assumed to be the launch date of the iPhone 6. But, as Mac Rumours points out, the iPhone 5S insert showcases 10th September as a date because it was the launch date of iOS 7, not the launch of the phone itself.

I think we’ve officially got to the stage where there are so few rumours still to come about the iPhone 6 that people have resorted to simply making them up. [MacRumours]

So the iPhone 6 could well be coming with a built in barometer able to detect changes in air pressure, that’s if these supposed leaked schematics are to be believed. So why would you need one? Presumably it would ensue your phone is able to make more accurate weather predictions, making it perfect for the outdoorsy types. Other than that it’s not really of much use.

The iPhone 6 is set to have a great many interesting features if the rumours are all to believed, but we’ll have to wait and see what Apple has to say about them when the phone is launched. [Trusted Reviews]

3. Rumours suggest the iPhone 6 won’t have a reversible USB cable

Last week it was reported that Apple had been working on a Lightning cable that’s reversible at both ends, which could have ended up being one of the first reversible USB cables to hit the market. Now it appears that this won’t be the case.  According to supplier Moca.co, Apple has yet to order any of the reversible cables for mass sale, although it has received some samples. The company does, however, make it clear that they will be selling the new cables come November, so it seems it’s using the rumour mill to its advantage as a marketing tool. Sneaky.

Whether or not you actually care for having a reversible USB cable, it’s good to knoe that they’re starting to make their way into the marketplace for those of use who don’t want to look at what we’re doing when we plug things in. [9t05Mac via BGR] 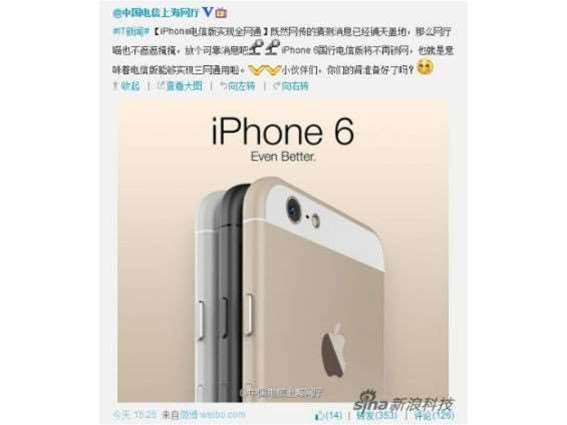 Most leaks come from random sources across the internet who don’t really have any legitimacy, but since this one has come from a telecoms provider in China we can probably be a little bit less sceptical. China Telecom posted the poster on its official Weibo account, showing off a phone with designs strikingly similar to what we’ve seen in various leaks. The promo has now been taken down, but there were people quick enough to grab a screenshot.

We still can’t take this as absolute truth, since it could well be a  clever fake, but it’s looking like 9th September can’t get here soon enough.  [PC Authority]