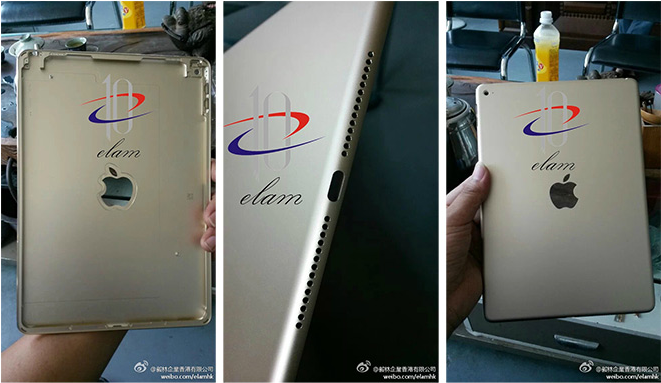 Coming straight out of China are pictures of what looks to be the chassis from the iPad Air 2, and it looks like quite a bit has changed. For starters there’s no button to toggle mute instead the case has some sort of pinhole above the volume controls, the purpose of which is unknown. The microphone porthole has also moved, now situated next to the rear camera, and the Apple logo (first seen in the Retina iPad Mini) is being cut out — presumably to house wireless communication components.

The next version of the iPad has been mostly ignored in light of all the rumours about the iPhone 6, but according to reports the device will have an “A8” processor, an will include the TouchID fingerprint scanner. [Apple Insider]

2. Apple could be bringing full screen ads to the iPhone and iPad

According to reports, Apple is planning on bringing full-screen “TV style” adverts to the iPhone and iPad later this year. Sources, who are only referred to as “people with knowledge of Apple’s plans”, state that the adverts will play automatically — unlike the current system which requires someone to click a banner first. Reports of how they’ll work are conflicting, with some people saying the new adverts will interrupt what you’re doing in-app, and others saying that they’ll only play once you’ve finished something — like a level on a game or an article.

Apple has not commented on the matter, and we should consider the rumours as just that. At the very least it’s a work in progress. If this system does get released  then chances are it won’t function exactly the same as it does now. [AdAge]

The closer we get to the supposed release date, the more leaks we seem to be getting — this time its pictures of both iPhone 6 models’ home button components. While many of us have assumed that the 5.5-inch model will just be a larger version of the 4.7-inch iPhone 6, these components seem to indicate otherwise. So far we have no clue what the differences might be, but it’s still an interesting thing to note. We’ll just have to wait for the official announcement to understand exactly what makes each iPhone different.

Of course these images might not be part of the iPhone 6 at all, but as UberGizmo points out, the included serial numbers are in line with leaked components we’ve seen so far. [Ubergizmo]