The ability to mind-read is fast becoming a reality, thanks to a brand new app for Google Glass, which allows you to take photos and share them using only your brainwaves.

Called MindRDR, the app was developed by London-based user experience company This Place and requires the NeuroSky EEG Biosensor to work. It’s this additional sensor, which you also wear around your head, that’s able to translate your brain activity into actions. The combination of app, sensor and Google Glass allows users to navigate the specially built Android wearable interface simply by concentrating, relaxing and thinking about it.

Users are provided with visual feedback in order to accurately time their shot. A horizontal line hovers across the centre of the screen and responds by moving upwards as the user concentrates harder. Once the line reaches the top of the screen, Google Glass takes a photo; if the user relaxes, the line moves further down the screen. Once a photo has been taken, the next choice is whether to discard it (by relaxing, hence moving the line to the bottom), or share it via Twitter or Facebook (by concentrating again and moving the line to the top).

‘It’s pretty magical when you’ve taken a picture and you’ve shared it, just by thinking,’ says Chloe Kirton, Creative Director of This Place, in a video. 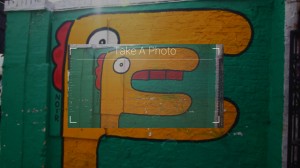 This fusion of science and technology is known as ‘telekinetics’ and is hugely exciting, not only because of its possibilities with speeding up social media interaction, but also because of future medical implications. The hope is that technology in this field could aid communication for sufferers of physically-impairing conditions such as severe multiple sclerosis or locked-in syndrome. This Place has announced it’s already in conversation with Professor Stephen Hawking about the product’s evolution.

CEO of This Place, Dusan Hamlin, comments: ‘Imagine a world where you can interact with a digital device, just by thinking about the content you want. That’s the world we’re building.’

We’re hoping that the next step will be to somehow build the sensor directly into Google Glass, making additional purchases unnecessary. But until then, the MindRDR can be downloaded free here, and you can purchase the full package for a hefty £1,071 here.