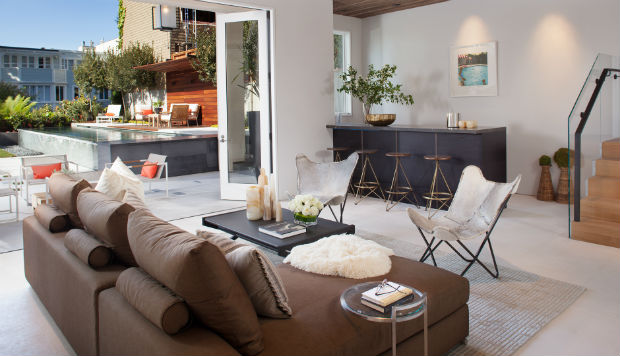 Our homes are becoming smarter everyday and even the dullest of tech brands are branching out into cool, connected devices to make our home lives easier and more automated than ever. But how would you like to live in the world’s most connected and automated home with a kitchen that has glass partitions, which turn opaque at the touch of a button, and an app that notifies you when you have visitors and deliveries? Well, look no further than this Jetsons-style house being built in San Francisco.

Across from Twitter’s headquarters, the fully renovated 4,700 square foot spec home, developed by Greg Malin, will have an entry system activated by fingerprint, which would be programmable for housekeepers, dog walkers or anyone who needs temporary access to the home.

In addition to the security system, the home’s video, lighting and climate systems are controlled with an iPad. The kitchen, which is open to the living room and overlooks the backyard, has a 46-inch Internet-enabled touch screen to display recipes, family photos or closed-circuit camera feeds from the home’s security system.

Stephen Palazzolo, Head of Design Management for Candy & Candy, the London-based property design and development management company, told The Wall Street Journal that clients range from those who want to be basically “off the grid” in very low-tech homes to those requesting futuristic upgrades.

With this in mind, the company developed an “intelligent mirror” that can take a picture of you in what you are wearing so it can be seen at different angles. It can also flash pictures of you in previous outfits so you can see them virtually. Until we get a wardrobe that scrolls and coordinates outfits for you, we don’t think there’s any invention that could make us feel more like Cher Horowitz.

Malin says that in focus groups he conducted before building the house, he learned that technology can be a big selling point – if it isn’t taken too far.

Speaking to The Wall Street Journal, he said: “I think [technology] is something that’s desired, but in a way that doesn’t impose itself.”

If you like the sound of this high tech home, we’re sorry but you’ll have to wait until early 2018, and have at least $3.4 million going spare. We can dream…