Following in the footsteps of Netflix, Amazon, Hulu, and Yahoo, Vimeo has just announced its first exclusive original series, High Maintenance, which will be released later this year.

Created by Katja Blichfeld and Ben Sinclair, it’s a comedy about an unnamed cannabis dealer (played by Sinclair) and the clients he interacts with. Guest stars include comedian Hannibal Duress and Dan “Downton Abbey” Stephens

It started as a 13-episode web series on Vimeo in 2013 but the company has now shelled out for an extra six episodes and will launch the show as the first original series in their expansion of Vimeo on Demand, which allows creators to charge for their content.

The site currently has a pretty thin selection of shows and movies, but earlier this year it announced a $10 million investment in content for the platform. And why not?

In the past few years, original online series like House of Cards and Orange is the New Black have won awards and critical praise (as well as devoted fans). We might never know how many viewers they have (with no need to report figures to TV advertisers, Netflix and co’s policy is pretty much “Mind your beeswax”) but they certainly have cachet, attracting stars like Kevin Spacey, John Goodman, and Jodie Foster (she’s directed two episodes of OITNB).

But shows that start off as web series are not only finding a home as paid content on streaming sites. Some of them are making the leap to TV. One of the most successful has been Comedy Central’s lady-slacker laugh riot Broad City, which was created by its stars, Ilana Glazer and Abbi Jacobson and boasts Parks and Recreation’s Amy Poehler as an executive producer.

Burning Love, a parody of cheesy dating shows The Bachelor and The Bachelorette (which stars Ken Marino from Veronica Mars and Party Down and June Diane Raphael from New Girl) started on Yahoo before being picked up by E! and then winning an Emmy.

Web Therapy, which Lisa Kudrow co-created and stars in, is now a Showtime TV series about Fiona Wallice, an unqualified therapist who gives terrible advice to clients via Skype. But it started as an improvised web series on LStudio.com (a site sponsored by Lexus), with guest stars including Julia Louis-Dreyfus and Meryl Streep.

With TV audiences now so fractured and increasing competition from online providers, buying an existing web property makes sense as it’s a proven commodity with an existing fan base.

It can also make for less conservative content: TV execs like stuff they know will work, so are less likely to take a chance on quirky, improvised programmes in unusual formats, starring people they don’t know, or on topics that have traditionally been seen as “controversial”. Some web series push the boundaries of what we expect: although it’s never explicit, the short and sweet series Husbands, which the CW picked up in the US, is a same-sex rom-com the likes of which we rarely see on mainstream TV (Cam and Mitch barely hug on Modern Family).

Meanwhile, The Misadventures of an Awkward Black Girl was writer and star Issa Rae’s attempt to present something different from TV’s usual stereotypical black characters. She went on to get a job writing for HBO.

The web can be a place to experiment, and – when those experiments succeed – to convince media companies to open their wallets. But not everyone wants to write for TV or sell their web series to a company, and with enough of a following, they can become a largely fan-supported endeavour. 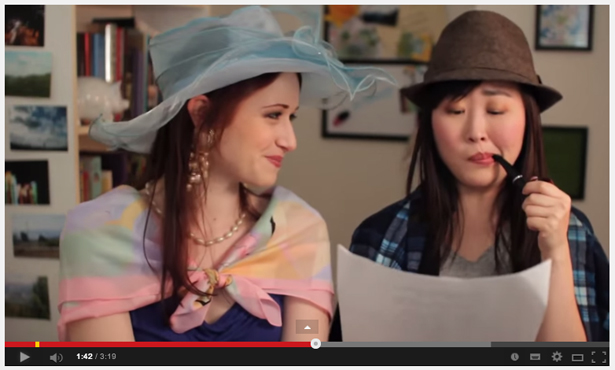 Modern day Pride and Prejudice retelling The Lizzie Bennett Diaries was a word of mouth Youtube hit and got a lot of publicity as a result (The Guardian called it “pure genius”). So it’s not surprising that the creators’ Kickstarter campaign to raise $60, 000 for a DVD release ended up bringing in a whopping $462,405.

Hannah Hart of My Drunk Kitchen, on the other hand, raised money via Indiegogo so she could travel to visit her fans, literally taking her show on the road.

And then there are Youtube celebs like self-styled make-up guru Michelle Phan, who has turned her online fame not into a TV career but an entrepreneurial one, with sponsorships from the likes of L’Oreal.

Of course, there are so many web series across so many platforms that it can be hard to keep track, and there’s no way you’ll ever be able to watch them all. But here are four of our faves that you might not have got around to yet (and should):

Every Wednesday, comedy writers and best pals Bryan Safi and Erin Gibson dissect the week’s pop cultural and social justice news and make fun of each other, sometimes while wearing wigs.

You don’t even have to watch Game of Thrones to enjoy hairstylist Jonathan Van Ness’s fast-paced, comb-wielding recaps.

If you loved the Lizzie Bennet Diaries, you need to check out this reworking of Emma by the same Austen-obsessed crew.

Images via High Maintenance on Vimeo, Netflix and The Lizzie Bennet Diaries.