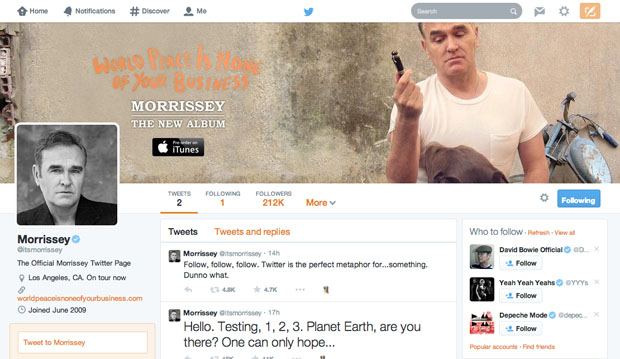 Singer and antagonist Morrissey joined Twitter way back in 2009, but (fortunately for us) he’s never taken to the micro-blogging platform to share his often controversial views about vegetarianism, Chinese people and the correlation between extinct rhinos and Beyonce’s handbags. Well, until now.

Yesterday, Morrissey (tweeting as @itsmorrissey) broke his silence and sent two rather confused-sounding and maybe philosophical tweets into the social media ether:

It’s probably no coincidence that the former frontman of The Smiths is starting to promote his new album, ‘World Peace Is None of Your Business’, at the same time as he turns to Twitter to talk about his music and his controversial views.

Here are some of our favourite reactions to his first foray into the world of Twitter:

3 months till Morrissey leaves Twitter, put your house on it, your cat on it, your Eurovision winnings on it.