Yesterday the internet was ablaze with a particularly scandalous social media scandal. Everyone’s favourite art-y, hispter-y type James Franco allegedly sent a bunch of private Instagram messages and texts to a 17-year-old girl from Scotland asking her to meet up with him.

The girl, named Lucy Clode, was apparently staying in New York with her mum and snapped a shot of James on her travels. She uploaded it to Instagram and the rest is salacious internet shame gold.

Soon after they were sent, the messages from James to Lucy were posted to Imgur by an unknown source (they’ve now been deleted) and here’s a little sample: 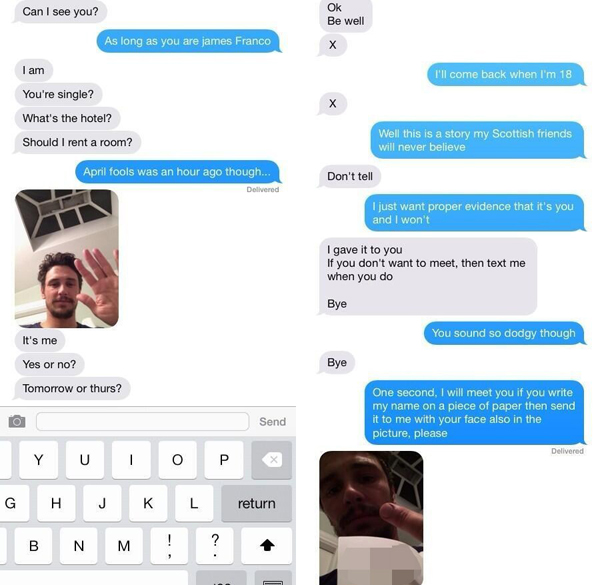 Now it’s not unusual for a guy to use social media to act all creepy in order to get a girl to meet up with him. We’re pretty sure all sexes, ages and professions have been on the receiving end of internet creepers.

But guys, this is JAMES FRANCO. Not only is he 18 years older than Lucy and coming across as one helluva desperate creep hitting on a 17-year-old, but he lives and breathes social media, so wouldn’t he know that this kind of behaviour is 99% guaranteed to blow up in his face?

Well, the plot thickens because it turns out this is all interesting timing. The trailer for Palo Alto, a new movie starring non-other than Mr. Instagram Creeper himself, has just been released and it’s all about his role as a a soccer coach who has a fling with one of his young female students. Isn’t that just too much of a coincidence? Could this all be just a big (and still kinda creepy) PR stunt? Or could this just be a very handy alibi?

Either way Twitter has (shockingly) reacted very strongly, many are calling him out for his weird and creepy behaviour, some scarily young teenagers are asking that he try it on with them and others are attacking Lucy because apparently to some this whole thing is actually all her fault. Sigh.

James’ reaction? A bunch of cryptic tweets about how parents should keep their kids away from him. Hmm, this could go down as one of the biggest unsolved mysteries of our time.