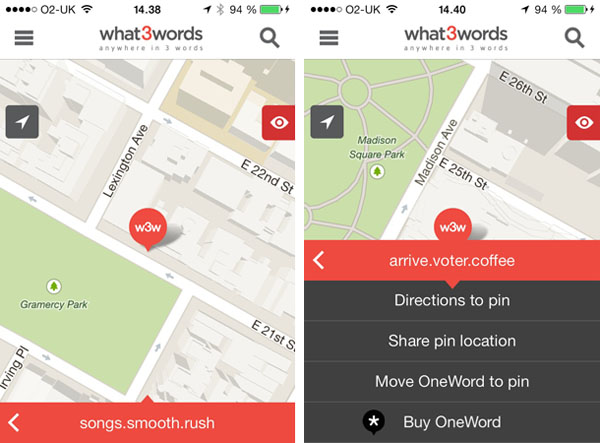 It’s been a while since a location-based app has had us excited, if anything the constant sharing of of where we were and what we were doing using Foursquare a few years ago just became annoying and creepy, so now most people will tag their location on Instagram and that’s about it.

But what3words is here to shake up the way we view location, and it’s not about stalking each other and showing off where we’ve been, it’s about mapping unique words onto the world one 3X3m square at a time.

First launched in July last year, what3words is a free service that maps out 3X3m squares and gives each one a unique address of just three words. Each 3X3m across the whole planet has already been given three words, but for £1.49 anyone can purchase personalised OneWords (just one word, or two squished together starting with an asterisk) to make describing a 3X3m square easier.

So for example, I’m looking out onto Newington Green in London right now and the spot I’m looking at is called along.coffee.think (click the link to see it has a unique web address too). However, for a small price I can call it *beccasview as well, or, you know, something much more exciting.

What can I use it for?

Because what3words narrows down location to such a small area, as apposed to addresses that are sometimes really confusing, it’s already had a lot of interest from businesses who find its 3X3m labelling service really valuable – especially those working in the delivery and services industries.

However, the cheesy romantic in me can’t help but think that it’d be a lovely way for you and your loved one to label a location that means a lot to you both – like the 2014 equivalent of carving your initials on a tree.

The truth is the possibilities are really endless and already developers are making use of what3words’ API in order to create services for themselves. This week Steve Caldwell, the founder of Crosstek, has created the watch3words app for the Pebble smartwatch, which allows users to find their unique three-word address wherever they are at the touch of their smartwatch button. So this means they can communicate their location in seconds without the confusion of coordinates down to the exact metre (well, the exact three metres). We’re interested in seeing how the service integrates with even more wearable devices in the future.

How do I start using it?

You can access what3words via the web, but this week the team has launched native mobile apps for both iOS and Android devices, which enables users to buy up bits of the planet and move OneWords around while they’re on the move.

You can download what3words from the iTunes store and Google Play for free.