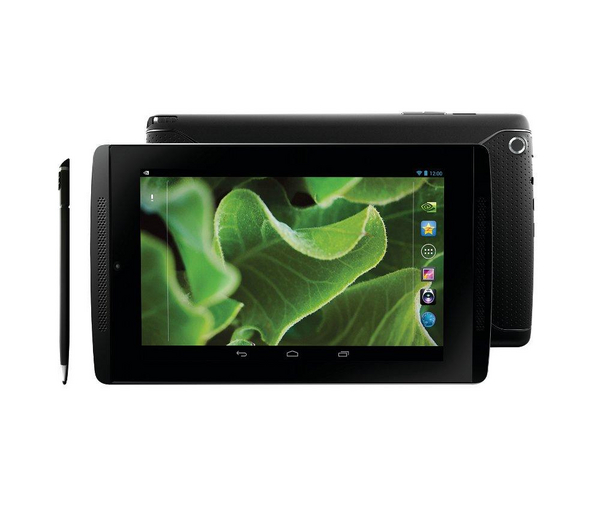 Nowadays, choosing a budget Android tablet isn’t an easy task, as there’s so many models to choose from, with Tesco’s Hudl and Google’s Nexus 7 two great examples at either end of the spectrum. And looking to make the whole process easier is Advent, with its Nvidia Tegra Note seven inch screen tablet, priced at just £129 from PC World.

The Nvidia Tegra Note certainly isn’t going to be winning any style awards, however it’s not exactly ugly, either. Constructed from solid plastic, sporting a soft-touch rear, the tablet feels great to hold, with dimensions coming in at 200 x 120 x 9.4 mm, weighing a healthy 320g.

At the front, you’ll find a 7- inch display, with front-facing audio speakers, with the top housing a micro-SD card slot and the volume rocker, as well as a slot for the stylus. The right side is where you’ll find the power button, along with the 3.5mm headphone jack and micro-usb port, with another speaker on the left.

When it came to testing the Tegra Note’s 1280×800 display, I was slightly disappointed – mainly because it’s just not as good as its competitors. In terms of pure resolution the Google’s Nexus 7, which features a 1920×200 resolution, has it licked, but then again you are paying a lot more for that model. The downside for me was that colours in videos often look washed out, and whites in particular have a sort of yellowish tang. On a more positive note, the touchscreen, I thought, was nice to use.

The Nvidia Tegra Note runs on the stock version of Android 4.2.2, with no interface from Nvidia’s end – a nice thing to see, in my opinion. What’s also great is the fact that an update to 4.3 has been promised, and shouldn’t take too long to become reality!

If you’ve used an Android tablet in the past, then you can expect a fairly similar experience in terms of how Android works and operates, with the ability to customise the Tegra Note’s multiple homescreens with folders and widgets. You also get full access to the Google Play Store for apps.

As well as countless Google apps already pre-installed, there’s also a few from Nvidia, including the TegraZone and DirectStylus which, just like Samsung’s S Pen app, gives you the ability to use the Note stylus to take down memos and doodle to your heart’s content – a great feature!

The tablet’s headline feature has to be its Tegra 4 CPU clocked at 1.8GHz, which is very fast and capable of handling both ordinary and demanding apps – which includes 1GB of RAM. There’s also a fifth core in the form of an ARM Cortex A15 processor, aimed at conserving overall battery life.

Unfortunately, the Tegra Note is only available in a 16GB version, although it’ll be ample for most people, especially if you only intend using it for browsing and downloading a few apps and games.

The battery life is also pretty impressive, lasting up to 10 hours for basic usage – such as browsing the web, accessing Facebook and playing a few games – which I mostly used the tablet for.

Tablets aren’t really made for replacing the ordinary digital camera, but the Tegra Note’s 5- megapixel snapper is actually great to use, with photos looking excellent. There’s also 1080p video recording which too deserves some merit.

As I’ve already said, there’s plenty of other good tablets out there to choose from, but given its very competitive price the Nvidia Tegra Note is definitely something worth considering if you’re looking for something a little faster, which retains a competitive price tag at the same time. Its only real weakness is a screen that lags behind those offered by pricier rivals. Everything else – processor, camera and build – makes it great value for money.