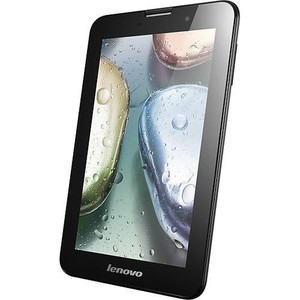 It seems that nowadays, everybody wants to own a tablet PC, whether it’s expensive or the cheapest model that you can possibly get. The Lenovo A300 happens to be one of the most affordable tablets currently on the market, offering up an overall package that’s certainly enticing. But is it any good?

Lenovo’s A300 certainly won’t be winning any awards for its design anytime soon, mainly due to the fact that it’s no different when compared to tablets of the same price. And as for build quality, things don’t get much better. Being made out of plastic obviously reflects on the tablet’s price tag, although it would have been nice to have seen something that doesn’t creak when in use.

That said, though, I was very happy with the fact that there’s a textured feel to the back, as it gives the A3000 a nice feel in the hand, despite creaking. To be a bit more technical, it measures in at 194 x 120 x 11 mm and weighs 339g – which isn’t bad at all! However, maybe it could be a tad lighter.

Just like the S5000, the A3000’s facial could be easily misrecognised as a large smartphone, all because the loudspeaker is at the front, above the 7- inch touchscreen, and not on the back like most other tablets. I personally quite like it this way – but then I am quite a quirky person.

Now let’s take a look around the tablet: on the left side, you’ll find nothing, with volume rocker replaced on the right. The top houses the 3.5mm headphone jack, micro-USB port and power button, with the bottom completely bear. The buttons, when testing, were very responsive.

The A300 sports a 7- inch display, offering up a 600×1020 resolution. To test out the overall quality, I spent time watching a few YouTube videos and viewing a few wedding photos, coming to the conclusion that the display could be a lot better. OK, it’s bright enough to get most things done, but it needs to be a lot crisper to be able to WOW the user.

If you were to purchase the A300, then you’d end up getting an older version of Android Jelly Bean – 4.1. I would’ve liked to have seen at least Jelly Bean 4.2. The actual user interface has been barely touched by Lenovo, maintaining a more stock experience. I’m more keen on customised UIs, though I had no major problems.

On a more positive note, you get full access to the Google Play Store, where you can choose from thousands of apps and games. You also get apps like Gmail and Google Talk pre-installed, as well.

Thanks to a quad-core processor clocked at 1.2GHz, I found the A3000 to be nice and fast when using both average and power-demanding apps, with the assistance of 1GB of RAM and 16GB of internal memory – which should be ample for most people. If not, you can use a micro-SD card.

In terms of battery life, the A3000 is OK, lasting pretty much most of the day when using it for basic activities such as browsing the web, updating your Facebook status and watching a few videos.

If you intend on using a tablet as a camera, then please don’t purchase the A3000, because images taken with its 5- megapixel snapper look absolutely pants. Videos aren’t much better, either.

But being more positive, I found the camera UI easy to use, unlike Samsung who’s UI is so confusing that you literally need to take a uni course just to be able to use it – OK, that’s a terrible joke, I know.

The A300 isn’t the best tablet out there, but then again you can’t call it the worst, and remember it is only £100. The camera isn’t great, the interface isn’t the latest and the display is average. If you have a youngster in the family that wants a tablet to play a few games on, then I don’t see why the A3000 wouldn’t be a good option to go for – it’s certainly affordable. If you have bigger plans for your tablet then you should consider looking elsewhere.