Sad, but inevitable news today as Blockbuster video are shutting up shop in the UK – closing all 264 of its remaining stores. This follows the announcement last month that the chain were closing down in the US as well. It’s a good job Netflix is red, as it’ll hide the blood on its hands. 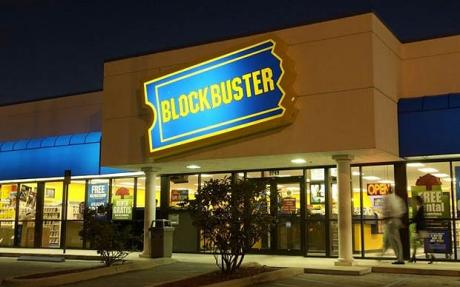 It’s not particularly surprising – the firm have been struggling for some time, having called in the administrators, and it was them, Moorfield Corporate Recovery who have decided to pull the plug. The stores will close for the last time on December 16th.

Apparently any stock still remaining by the 14th will be sold for up to 90% off – so if there are any vultures reading, it could be a good time to grab a bargain whilst the people who serve you contemplate the grim realities of unemployment.

Blockbuster are (were?) an American company, but came to the UK in 1989, when they bought 875 Ritz Video rental stores – slowly these were converted into the Blockbusters that came to be so familiar on the high street. At its peak, the company had over 9000 stores and 60,000 employees around the world.

The decline though was inevitable as soon as mail-order and later streaming service became much more convenient than going into town and getting hold of a physical disk. Apparently in 2000, the Blockbuster turned down the opportunity to buy a little-known company called Netflix for $50m. Whoops.

So where does this leave the hightstreet? Beyond the similarly ailing GAME and HMV… is there going to be anywhere left soon to buy CDs and videogames? Blockbuster will be laid to rest in the graveyard next to the likes of Zavvi (née Virgin Megastores), Our Price, Gamestation, Electronics Boutique and countless others. And we’ve only really got ourselves to blame.