A few years ago the HTC Desire was the Android phone to have. Elegantly designed, it could do everything an iPhone could, but at a better price. Then the Samsung Galaxy came along, and dominated the Android field.

Suddenly it seemed like everyone had a Galaxy… apart from me. I opted for the battery gobbling HTC Desire HD rather than a Galaxy S2 – which was like the larger, uglier, deceased younger brother of the original Desire.

Back to 2013 and HTC have recently released the Desire 500 – can they win back my love? Here’s my review. 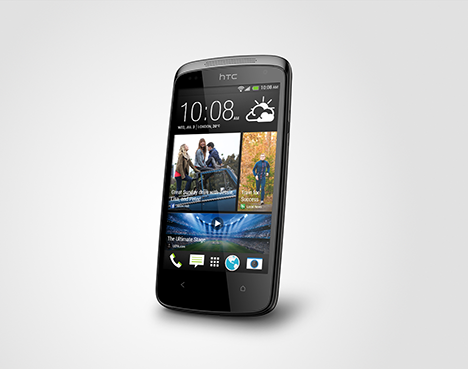 The 500 is squarely aimed at the midmarket Android user. The top end has the metallic HTC One now, leaving the plastic 500 to those on a budget. This said – it still feels solidly built.

The screen is a fairly large 4.3″ though perhaps disappointingly, isn’t HD – running at only 848×480 resolution. What appears on it still looks nice and crisp – it’s only when playing a HD video that you notice the things start to look a bit fuzzy.

Surprisingly despite HTC’s endless TV adverts touting the dual speakers on the HTC One, this new 500 only has a single speaker. It does the job, but it doesn’t actually blow you away.

Interestingly too, unlike some Android devices, the Home and the back buttons are still buttons on the casing – not just sat permanently at the bottom of the screen. They’re not proper buttons – but the touch sort that you don’t press down or pop up. You know what I mean.

Perhaps the biggest thing to note isn’t what’s there, but what is missing. Unlike other Android phones, the 500 doesn’t have an easily removable battery. You can replace it – but this entails snapping off the entire back cover of the phone. Not the end of the world but more fiddly than would be ideal.

On the inside, it’s powered by a 1.2ghz Qualcomm Snapdragon 200 – not the fastest processor in the world, but it still seemed to do most things okay. Switching between apps still felt fast and quick, even when switching between fullscreen video and web browsing. Similarly there’s 1GB of RAM – which seems about standard with other phones in this bracket.

Unfortunately storage is only 4GB – which on the review phone I was sent, was almost running out with very little installed on there – so you’re definitely going to want to expand it with a MicroSD card – which sadly isn’t included.

Connectivity-wise the phone has everything you’d expect – all of the normal wifi and bluetooth standards, as well as DLNA for media streaming and there’s even NFC, which is a nice bonus.
Camera-wise, again nothing spectacular – but competent. There’s an 8 megapixel rear camera and a 1.6MP on the front – and it can shoot in 720p. On the software side, the phone is running Android Jellybean, albeit a version covered in HTC’s own custom software. For Android purists, this is likely to irritate (and I bet it’ll mean you’ll have to wait longer for the KitKat upgrade), but HTC Sense seems to have come along leaps and bounds since the Desire HD.

Perhaps the biggest difference, if you’ve not used an HTC recently is the addition of “BlinkFeed” to your home screen. What this does is aggregate different sources of updates together – so once you’ve provided the right credentials, it’ll show a selection of your tweets, and Facebook updates, as well news stories from a variety of sources including many newspapers. Whether you want to be confronted with the mugshot of the latest murderer when you unlock your phone though, is up to you.

The phonebook nicely integrates with Twitter and Facebook accounts too, so you can get a snapshot of what they’re up to before calling.

My one worry with all of this though is what it will do to battery life – if the homescreen is refreshing every few minutes, and the Twitter entries in your phonebook do the same… that’s a lot of data and a lot of processing. So don’t be surprised if you end up switching these off so your phone will last more than a few hours.

All in all, the HTC Desire 500 seems like a competent piece of hardware. As a midmarket phone it fill it’s role very comfortably – offering a slick Android experience at what will no doubt be a reduced price.

If you’re looking for something new and don’t want to break the bank, this could be a good choice – but if you’re a “power user”, then you might want to look elsewhere.