Apple have just announced a couple of new iPads – upgrades to the existing iPad and iPad Mini. Let’s take a look at what’s new! 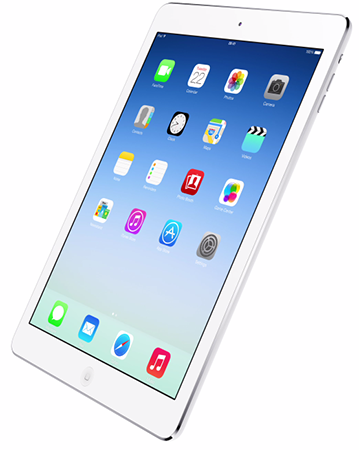 First up is the full-size iPad. Or the iPad Air as we should be calling it (yes we think the name is silly too). This is Apple’s “full size” device with a 9.7″ screen. Whilst yes – it’s a rectangle with a screen (what did you expect?), take a closer look and it has some impressive spec:

It’s 20% thinner than the previous iPad (only 7.5mm thick) and it weighs only 1Ib – or about 454g in British measurements. The bevel around the edge is apparently 43% smaller.

On the wifi front this is the first Apple device to use “multiple-in-multiple-out” (MIMO) technology, which should result in more stable connections. There’s a 5MP iSight camera on the rear too, and in a first for Apple, dual microphones to make things a bit easier for Siri and other sound recording apps. Apple claim this will have a 10 hour battery life.

The iPad Mini has also been refreshed – finally coming with a higher resolution (2048×1536) display, still packed into a 7.9″ screen. Spec-wise this is pretty much on a par with it’s taller brother – also coming with an A7 chip and all of that good stuff.

Colourwise both devices have a new split colour scheme – coming in “space grey and black” or “silver and white”.

What’s interesting is that Apple have decided to keep making the big iPad 2 and original iPad Mini to sell in addition to these new devices – but at lower price points, providing more an entry-level option.

On the software side, Apple had a lot to announce for desktop and notebook computers (the new operating system, Maverick is free and available today!) – but the crucial takeaway for prospective iPad users is that the iLife apps (like Microsoft Office) as well as Garageband and iMovie have all received updates for iPad, and are free with new purchases. Nice!

Hopefully we’ll be able to get the new devices for a proper review soon.