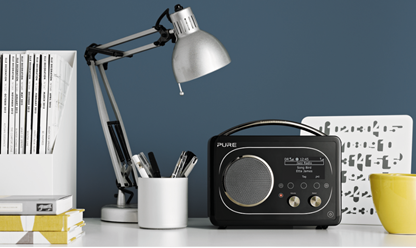 Pure has added a top end digital radio to its range in the guise of the Evoke F4. The £179.99 model tunes into both digital and internet radio and can also hook up to Pure’s Jongo multiroom music system.

The Evoke F4 can be used on its own or, if users add extra Jongo speakers or adapters, on the same Wi-Fi network as part of a multiroom system. Pure have also added Bluetooth to enable casual streaming from mobile devices.

The radio is compatible with over 15 million music tracks from the Pure Music subscription service and it comes with Pure’s tagging technology so that by pressing the tag button a listener can find out the track and artist name.

It accesses content stored on other devices via the Pure Connect app for iPhone, iPad and Android via Wi-Fi or Bluetooth.

It goes on sale in June. More here.