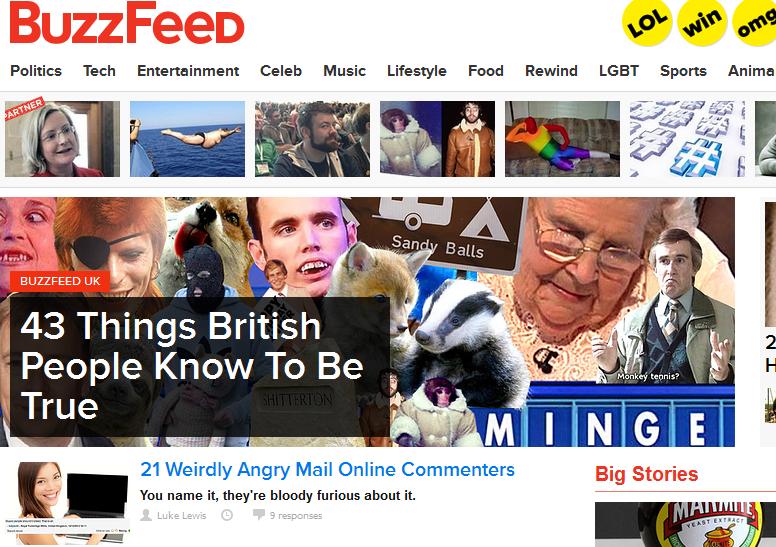 In case you haven’t yet heard the news Buzzfeed, that American site so beloved of people who like kittens behaving badly, has launched a UK edition today.

Now, UK flavoured versions of US sites haven’t always gone down well over here. The Huffington Post UK got a bit of a pasting when it first arrived though it has since settled a bit and become part of the UK media scene.

So I was very sceptical about Buzzfeed UK? How many cats with British accents are there?

I really shouldn’t have worried. Edited by former NME.com editor Luke Lewis Buzzfeed is a tour de force of all things British – which almost certainly wouldn’t have made the original version of the site.

Where else would you be able to see 15 Orangutans That Look Like Boris Johnson or 21 Weirdly Angry Mail Online Commenters (well except on the Daily Mail but you would spend all day compiling them).

Not everything is quite as inspired. The 27 Extraordinary Facts About The London Underground seems like a parade of quotes from Wikipedia accompanied by shots from Flickr – which invariably aren’t relevant to the station that is being posted about.

Also where the ferret is the footy stuff?

But it is early days, and if Lewis and his team can keep up this standard then Buzzfeed UK is going to be an absolute hoot.

It is fascinating too in that it provides a very real insight into what being British means in 2013 – so we are all about The Daily Mail, Boris Johnson, Marmite, The Tube, David Bowie and Alan Partridge. Is that good? I am not too sure…

Btw when you have checked it out don’t forget to take a peek at the newly revamped MSNNowsite which features Becca, once of this parish, Caddy.