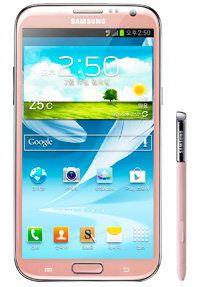 Yesterday the Korea Times published a leak, allegedly from a Samsung employee, which gave details of a phone with a 5.9inch screen that the company will launch later this year.

It doesn’t say it specifically but the phone in question is almost certainly the next generation of the Samsung Galaxy Note.

The Note has become a huge cult hit since its launch nearly two years ago and has had an important impact on the development of screen size, encouraging both Samsung and other makers, to offer bigger screens on their premium phones.

Samsung also recently unveiled a tablet, the Note 8.0, which has an eight inch screen yet can make and receive phone calls.

The company is also under pressure from a host of makers, from Sony to Huawei, who have launched big screen (or Phablets) as they have come to be known phones.

So is a 5.9inch screen the optimum size for a phone? I think it probably is. Have you ever tried to pocket an Apple iPad mini? Its seven inch screen makes it just a little too large to fit in your jeans. If the Note 3 is skinny like its predecessors it should just about make the cut and fit in trouser pocket.

As well as passing the trousers test a 6inch-ish screen is about as big as it goes for day to day use. Male users can comfortably get their hands around a handset with a six inch screen – any larger and the device would become more unwieldy.

I wonder if Samsung could push the format to 6.5inches, but I guess that might be a little too far.

I think this is very important. Samsung needs to push the screen out as far as it can so there is less wasted space. This would reduce the size of the device a little.

If it can be made thinner in any way this would be warmly greeted by Note fans too.

This is the much hyped feature that will apparently be part of the spec of the Galaxy S IV. Basically it means that the phone will be intelligent enough to work out when you have finished reading a page and shift down to reveal the next part of the story. In theory that’s no more constantly swiping pages on ebooks, or having to push the screen up to read new paragraphs on web pages.

This would be great on smaller screen but would help solidify the Note’s status as a great way of reading ebooks and surfing the web as well as offering some differentiation between the Note and its Chinese rival Phablets.

One of the saddest things about being a Galaxy Note owner is that you tend to get jealous of the range of accessories available for other handsets. There are a few cases, but Samsung really could do with creating some innovative new add-ons not just for its flagship Galaxy S IV phone but also for the Note.

This goes without saying but any of the incremental step ups that feature on the Samsung Galaxy S IV (see here) should be added to the next generation of the Note.

A few tricks borrowed from the BlackBerry Z10

Namely deep integration of Swiftkey to make the handset ideal for typing social media updates and even blog posts as well as short messages and email. The Galaxy Note 2 has an interesting split screen option. Maybe this could be developed on the 3, possibly even enabling the user to have three apps open simultaneously – email, the web and maybe Twitter/Facebook.