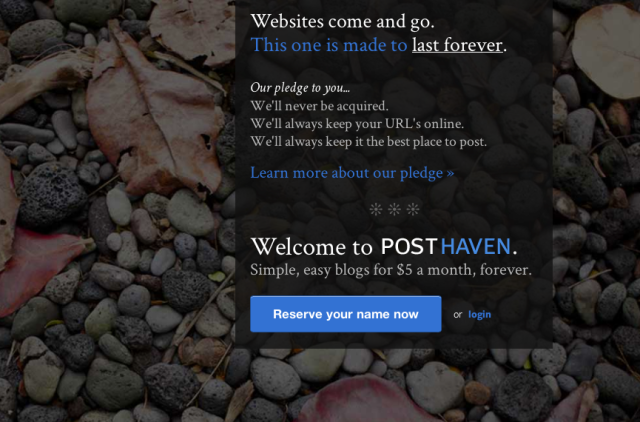 Still hurting from the news that Twitter is going to pull the plug on blogging service Posterous?

Worried that your current blog format might do a Posterous/Vox etc and head off to that great blogging platform in the sky?

Well the team behind Posterous may have an answer. In an intriguing move Posterous co-founder Garry Tan has heard your pleas and is coming with a new blogging platform called Posthaven, that he promises will never shut down.

Tan says it will be the best blogging platform around and promises that it will do all that Posterous did and more. On the site’s holding page he says

Everything you expected and liked about Posterous will eventually be in Posthaven. Things like post by email, multiple users, pages and links, full HTML theming, and the bookmarklet. We’ll deploy the features and let you know as soon as they’re available.

Tan’s pledge to keep Posthaven going forever means that he has chosen a slightly different approach to building a user base.

We’re not going to show ads. We’re not looking for investors. We’re going to make money the best way we know how: charging for it.

It sounds like it has already been a hit as the site has struggled to deal with all the attention it is getting.

Anyhow good luck to Tan and his team. There are a lot of Posterous users who will be looking to migrate their blog elsewhere and and a Posterous on steroids – which is what Posthaven are aiming for – sounds like a good option.

If the idea of paying for your blog irks you then there is always WordPress and Tumblr. If you fancy the latter then there’s Just Migrate’s new service which TechCrunch has the details on here, which will transfer your posts over to Tumblr.

You can find out more about Posthaven here.