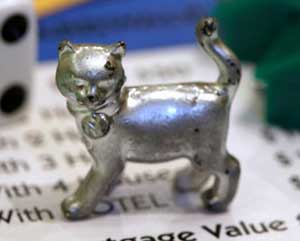 Monopoly, everyone’s favourite selfish, money-grabbing board game, has had a bit of a makeover this week and has replaced the dumb, old iron thing with a brand new token, a KITTY CAT.

That’s right, the team at Monopoly HQ (we want to go to there) decided that the dumb, old iron thing was just too dumb and old, so came to the conclusion that it should be replaced with something much better and more current, like a guitar, robot, helicopter, cat or diamond ring. Once it was put out to the vote the cat came out on top (OBVIOUSLY), which now means at Christmas everyone will be arguing about who can be the cat and some poor soul will be left with the lame thimble :(:(:(.

Admittedly people like cats anyway and we’re sure if the internet didn’t exist (WHAT A TERRIFYING THOUGHT, HOLD US) we’d still be big fans of the furry little mentalists anyway. However, we don’t doubt that memes and GIFs and all of the other magical things the internet has brought to us have made them even more popular than ever before.