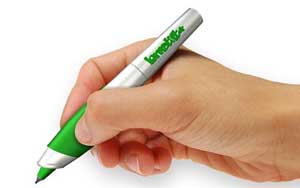 Remember the smart fork unveiled at CES that vibrated when you were a big fatty and ate too much? Well it seems tech companies are creating vibrating gadgets to make us more awesome in other areas of our lives too, like to combat all of those terrible spelling mistakes we always make.

The device is specially programmed to recognise movements associated with forming letters and words, so when it detects a deviation in your spelling or grammar it’ll give you a gentle little buzz to make you look again at what you’ve just written.

The pen has been developed by a German company called Lernstift in order to help children take a closer look at their writing and make them evaluate their work more accurately and efficiently and certainly sounds like it’ll be a handy and quirky addition to any classroom.

However, if most people knew they were making a mistake then surely they wouldn’t have made it in the first place? So we imagine there’ll be many confused users with buzzing hands who are sat there racking their brains about what they’ve done wrong instead of actually getting anything done.

The device is only at the prototype stage for now, but will be looking for funding over the course of the next few months.