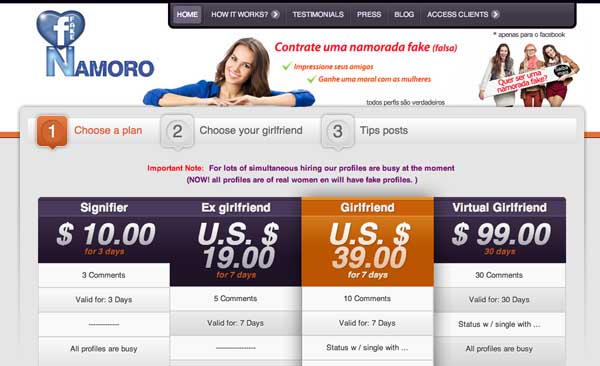 Awh it’s hard to be a single guy when everyone else is having lots of sex and buying their girlfriends chocolates and kittens. But fear not, because a Brazilian company has decided to set up a dating site with a twist, the twist being the girls aren’t real, they’re just pretty Facebook fakes to fool everyone else into thinking you’ve got a girlfriend. Genius! We see no problems or issues with this plan WHATSOEVER.

NamoroFake.com asks that you hand over just $39.99 of your hard earned cash – we’re sure REALLY lonely people can think of another way to spent nearly $40, but each to their own – to create a fake Facebook profile full of cutesy photos, updates and all of the other bits and pieces of information to dupe your mates into thinking she’s a real life human being.

But fear not, it’s not even as if these women are completely made up, apparently men are lonely and women are poor, so many of the profiles are copies of actual people who hand over their details for a 50% share of NamoroFake.com’s profit. This is great in making the whole messy lie as convincing as possible, but still doesn’t solve the problem of what to do when someone asks you to bring her round for dinner…

The whole idea behind the site is to make lonely people feel a bit less lonely, but it’s primary function is to make exes jealous. However, if you’d rather impress a potential lover than make an old one feel crappy about themselves, then you can purchase an ex-girlfriend too, which presumably in some people’s warped minds makes them more appealing to the opposite sex.

It’s almost as creepy as the virtual girl who’ll sit and smile at you. Almost.