The Ford Fiesta is known for being affordable and reliable and has been a great car for all types of motorists, be it city dwellers or yummy mummies, for decades. To keep up with the times and a fast moving car market, the Ford Fiesta has been boosted and reimagined ahead of 2013 and now comes packed with gadgets and tools wrapped in a range of bright colours – including the new copper and yellow.

Which better way to put a new car to the test than to take it for a spin in one of the most demanding cities to drive in? That’s exactly what we did: A couple of weeks ago we headed to the Eternal City with Ford to road-test the new and improved Fiesta. 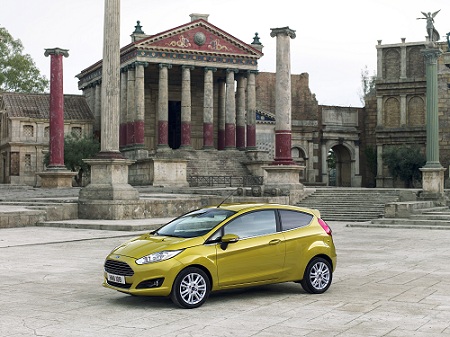 The route started at the famous Cinecittà studios (set of the film Gangs of New York and HBO’s Rome) and took us to the heart of the ancient Rome, past the Colosseum, before directing us back to cinema city. Very responsive on both steering wheel and breaks, the Fiesta was a smooth ride which let us flow along with the traffic and stop with ease. The latter was put to the test when a well-dressed elderly gentleman holding his hands up like a hard rocker appeared from nowhere and walked straight into the road in front of us. Alert as we are, we of course stopped and let him continue to wherever he was going undisturbed, but had we not spotted him the newly added Active City Stop would certainly have kicked in – it stops the car automatically if it senses an object in front of it (if you’re not going over 15km/h that is).

So apart from the Active City Stop, what’s new and improved on the Ford Fiesta?

The new model is the first car in Europe to feature Ford’s MyKey technology, which enables you to place restrictions on younger drivers (and journalists…) and not let them have too much fun when driving around in the car. Using the technology, you can set a top speed limit and a maximum volume on the audio system. And if anyone in the car has forgotten their seatbelt, you can make sure that annoying beeping sound doesn’t go away until they buckle up.

Speaking of the audio system, this time around Ford has put the buttons that control the car’s Sync Bluetooth audio system on the steering wheel and the voice control which means you don’t have to look away from the road when changing your music or looking up a phone number on your iPhone.

Another new addition is the Emergency Assist, which will call the emergency services automatically should you be in an accident. Using your phone it enables hands-free communication with the response unit and will provide them with GPS coordinates to where you are so help can find you.

If you’re interested in investing in a new car in 2013, the Ford Fiesta will start rolling out in January, starting at £9,795. For a full price list and in-depth look at all the shiny new technology head over to the Ford website.