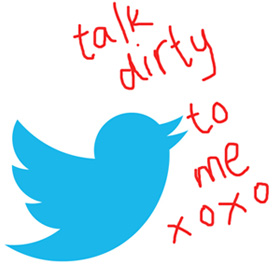 Single guys and girls no longer meet through friends, dating sites or (god forbid) in real life, but spend most of their time finding new people, flirting and being dirtbags on Twitter, according to a new study.

The research, commissioned by discount website VoucherCodesPro.co.uk, found that out of 1,267 active and single Twitter users more than 45% admitted to using the micro-blogging platform as a way to date and flirt their geeky little asses of.

The study then delved deeper into this Twitter flirting activity (we’re gonna coin it flittering, if that’s OK?) and found that 66% of those who flitter do so with people they already know, but a bold (read:dirtbag) 24% reached out to those they didn’t know and an embarrassing 27% even admitted to sending something a bit naughty to celebrities. Really? REALLY?

As you’d expect most of this flirting takes place in the filthy underbelly of Twitter, known officially as Direct Messaging, with 83% admitting they’d flittered privately. Out of those dirty little DMers 56% said they’d sent sexually explicit messages and hilariously 14% admitted to accidentally sending a public @ mention instead (LOLZ).

We can’t say we’re shocked by the stats, but do think this proves just how important it is to keep your password private and of course get out once in a while too…

The study was carried out by VoucherCodesPro.co.uk and polled 1,267 active Twitter users from across the UK.

Related: SEXTING: Are we all careless, cheating mobile phone flirts?