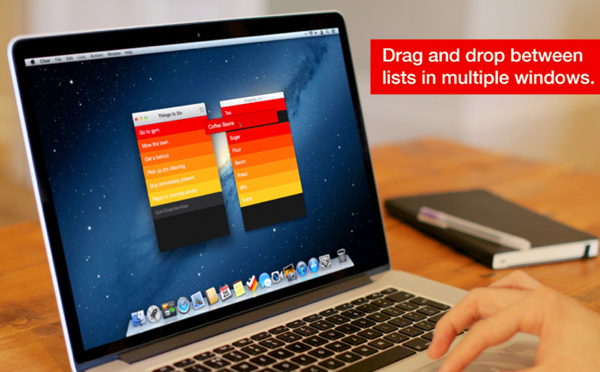 One of our all time favourite iPhone apps, Clear, has made the transition from mobile to Mac today and is set to (fingers crossed) turn us into the most awesome and efficient human beings.

Up until now Clear has exclusively been an app for the iPhone, which basically just allows you to write to-do lists. However, it’s the smooth and intuitive way you use a number of gestures to work your way around the app, nestle lists and sort everything into categories that had us hooked from day one. Of course plenty of other apps let you write to-do lists, but it’s definitely the user experience that sets Clear apart from the rest and makes it truly unique (and normally we think the word unique is just marketing BS).

Now the team has decided to take Clear’s mobile experience and take it to the Mac. Obviously they had a big challenge, how do you take an app that works so well on mobile and translate it to the desktop?

Of course Clear can’t be all about gestures on your Mac, so instead it’s driven by your mouse/touchpad. However, the team are keen to point out it’s not just a direct translation for each, there’s been a lot of time and effort put into making it just as intuitive and easy-to-use on the desktop as the iPhone.

Phill Ryu, the CEO and co-founder of Impending (one of the teams who built the app) told The Next Web about some of the challenges he faced:

“It was actually the things that you don’t need to worry about in iOS: keyboard shortcuts, multi-window support, even moving items between windows.

“Mouse-interactions are harder still. Because of the nature of the cursor being an abstract representation of a user’s actions, we spent a lot of time figuring out what really worked: Bringing task-based actions to left and right-click, hovering between items, and then offering keyboard-shortcuts relating to where you’re hovering – finding the sweetspots there were actually much more challenging.”

You’ll have to try the app out for yourself to see all of the nuances and even keyboard shortcuts for each action, but some of the new features include separate windows for different lists, making it easy to transfer tasks between them, an option that wasn’t really possible on mobile devices.

As you’d expect, there’s iCloud syncing between Clear for Mac and the iPhone version of the app, so you can seamlessly update your tasks whichever device you’re using.

Overall Clear still looks slick and the user experience has clearly (sorry) been paramount throughout the development of the Mac version too. There are other to-do list apps in the wild and plenty that sync between mobile and desktop just as easily, but Clear’s simple premise, intuitive controls and of course good looks have had us making the transition onto the Mac version without any hesitation.