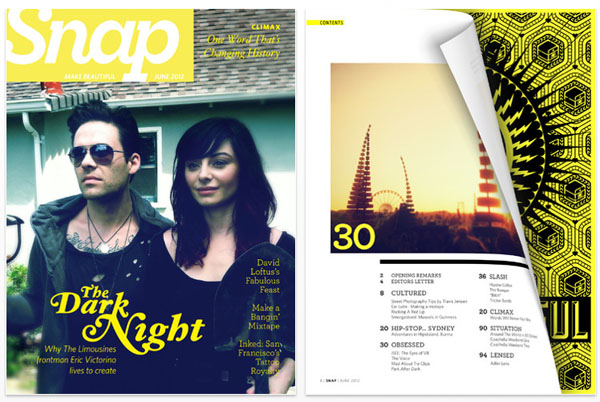 Earlier in the year Hipstamatic launched Snap, a magazine all about how awesome mobile photography is that also takes a peek at different cultures across the globe with a few other lifestyle bits and pieces thrown into the mix too. Until now the magazine has only been released for iPad owners, but this week it’s available via the web and iPhone too.

Despite it’s community of dedicated users, when Facebook and Instagram became BFFs poor little Hipstamatic fell by the wayside a little and was no longer the go-to application for iPhone photo filter fun. Therefore, Snap presented a new way for the brand to engage with different audiences and ensure people are all passionate and geeky about iPhone snaps again.

Since its initial launch back in May, the magazine has reached the top spot for photo/art magazines in the App Store even though Hipstamatic hasn’t released any official stats about downloads. The magazine itself contains an interesting mix of content, although it’s clearly made by Hipstamatic it’s not annoyingly “salesy”, there are stories about different cities, photography tips and examples of great art across the globe.

Opening up the magazine to web and iPhone users expands its reach, but whether it’s worth it in the long run remains to be seen.

You can read Snap via the web and for iPhone and iPad devices from iTunes.