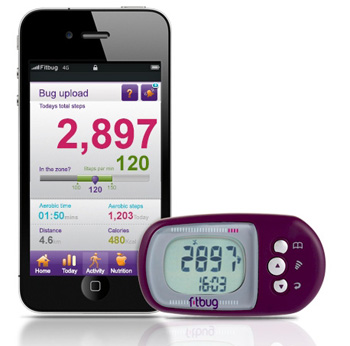 The Fitbug Air is another new Bluetooth self-tracking gadget

A new self-tracking device called the Fitbug Air has launched this month, which monitors the steps you take, the calories you burn and the distance you cover. Yep it sounds the same as every other Fuelband or Fitbit or Up bracelet out there, but its practical design and wireless syncing means it could prove to be a real contender in this space.

Most light gadgets are designed to wake you up with a fake sunrise or simulate bright sunshine during the day, but this one hypnotises you into dozing off.

Runkeeper’s popular Android app has had an upgrade this week bringing it up to speed with the iOS version with features like deeper Facebook integration and leaderboards.

Wahoo has recently launched the Wahoo Balance, a Bluetooth scale that’s set to give Withings’ offerings a run for their money.

Eye implant allows the blind to see Braille on their retinas

Researchers in the US have been working on a new way to help blind people read Braille that sounds like it’s straight out of a sci-fi movie, by streaming it directly to their retinas.