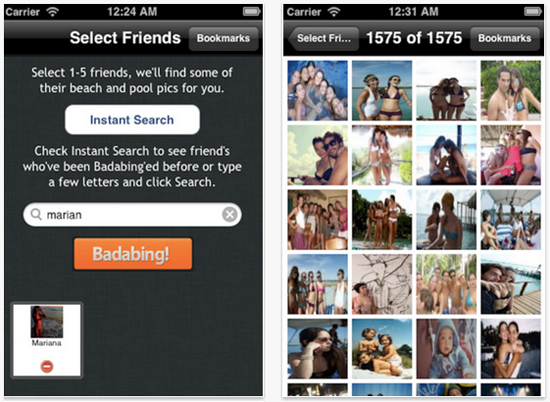 The world (OK, OK geeky online app world) is up in arms about a new sleazy app called Badabing!, which trawls through your friends’ Facebook photos and then brings up only the most nakey and revealing shots.

Many websites and even UK tabloids have been up in arms about the app, calling it disgusting, depraved and even comparing it to the recent Creepshots Reddit scandal, but in fact it’s completely different.

If you don’t want weirdos stalking photos of you in that itsy bitsy bikini, don’t upload it to Facebook and don’t have weirdos as friends. It’s really not rocket science.

Of course we’re not praising the app or its scumbag developers, but we also think the online reaction has been a little bit (read:ridiculously) over the top considering these are photos we’ve all uploaded ourselves at some point or another. It’s not great tools are being introduced to allow pervy people to become even more pervy, but take a bit of responsibility for your own actions for a change, yeah?

UPDATE: Judging from the reviews on iTunes there’s not much to worry about anyway, as the app is pretty rubbish at the one thing it claims to do, finding bikini shots.

Badabing! is available from iTunes for £1.49.