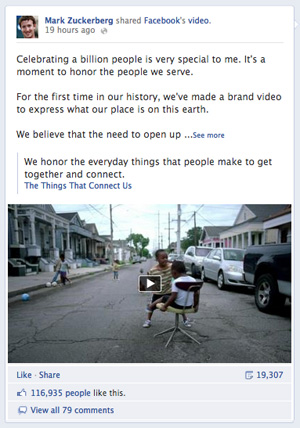 So it’s official, pretty much all of us are on Facebook. Well, one billion of us, which may as well be all.

Facebook released stats yesterday confirming the HUGE number and good ol’ Zuckerberg wrote a long and melodramatic update about how Facebook has single-handedly solved world hunger and made everyone BFFs. Or something like that:

Facebook isn’t the first thing people have made to help us connect. We belong to a rich tradition of people making things that bring us together.

Today, we honor this tradition.

We honor the humanity of the people we serve.

We honor the everyday things people have always made to bring us together:

Chairs, doorbells, airplanes, bridges, games. These are all things that connect us.

And now Facebook is a part of this tradition of things that connect us too.”

Wow, he’s just like a modern day Jesus, isn’t he?

Mark Zuckerberg also introduced Facebook’s first branded video, which has good intentions but is overall a little underwhelming and weird. How did you not already know chairs are like Facebook guys, GAWD?!

The Facebook team decided that, while they all bask in the glory of getting one billion people to tell them all about their lives on a daily basis, they should also release some interesting stats about how we’ve been using the social network. So here they are: