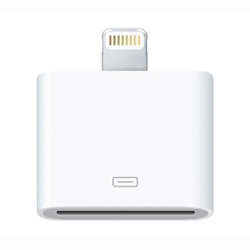 Apple’s new iPhone 5, iPod Touch, iPod Nano and iPod Shuffle models, which were all revealed last night, proved to be super-slim thanks to the use of a new Lightning connection for both charging and data transfer.

Much smaller than the standard 30-pin connection that’s been a standard on Apple products for a decade, many of us feared that the new Lightning connection would make old stereo docks and accessories obsolete due to the big size difference. However, at the event in San Francisco yesterday, Apple promised that a £25 adapter would stop all kinds of old kit becoming completely useless.

But now a day on it seems as though that may not be the case. Even if you do buy the 30-pin-to-Lightning adapter, some docking stations and accessories may not actually be compatible.

According to our sister site Tech Digest, the problem lies with the way the Lightning connection handles signals. In short, Lightning isn’t capable of outputting an analogue signal, meaning that any kit that takes an analogue signal won’t work. Worryingly, that’s quite a large number of them…

The Apple website itself states that “some 30-pin accessories are not supported”, and outright admits that “video and iPod Out [are] not supported” by the adapter.

The only possible solution would be that tucked away inside that tiny adapter is an even tinier DAC (Digital-to-Analogue Convertor). But at just £25, we think that’s pretty unlikely.

The Tech Digest team are reaching out to Apple about this now, and will update when we hear word back.