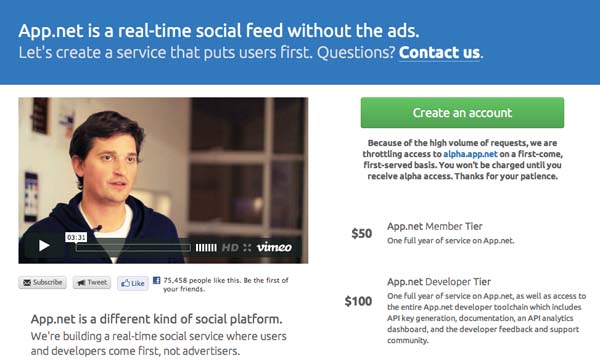 We haven’t been excited about the launch of a new social network since Google+ (you know, the one with the dancing circles), but over the past week we’ve heard a lot of interesting things about the subscription-based alternative to Twitter, App.net, which is currently in development…

So what is it?

On its home page right now App.net is described as a “real-time social feed without the ads”, so just think Twitter but for those who get irritated by some of the annoying things it does and want a platform that’s dedicated to them and not advertisers:

“We believe that advertising-supported social services are so consistently and inextricably at odds with the interests of users and developers that something must be done.”

However, it’s not just about creating a nicer online space for users, but after growing concerns about Twitter’s relationship with developers the App.net creators aim to keep the platform as open as possible.

The catch with App.net is that unfortunately you do have to pay for it because, let’s face it, the creators have to bring money in somehow. You can sign up now to become a member for a year and it’ll cost you $50, although there’s no indication of whether that number will get higher or lower in the future.

But is it actually going to be any good?

Well it’s hard to say given the fact it’s not properly up and running yet (and obviously because we don’t have $50 to just throw into the online ether right now), but regardless of whether you think App.net is genius or ridiculous it seems plenty of others are really buying into the idea of a fairly ad free online space. This morning The Next Web reported that the creators have already surpassed their funding goal of $500,000 and big tech names as well as celebrities have already signed up, such as Stephen Fry.

The main problem with the idea behind App.net is that we wonder how many people out there (other than social media geeks, of course) REALLY care about an ad or two in their Twitter feed or the fact an app has been granted access to their account? The answer is probably very few, so whether App.net will be successful among anyone but techies in the future remains to be seen, but we guess that’s kind of the whole point…

Find out more about App.net.