If you’re looking to do something a little bit different in the capital over the next few weeks, then ditch the usual tourist haunts and take a little wander around some of London’s hidden waterside areas. Yes really. It’ll be fun, we PROMISE.

The WWF has recently ventured into the world of mobile, launching a free smartphone web app called The Waterside Challenge, which has been designed to get people walking around some of London’s top nature hotspots. The app activates once you visit one of ten special locations and allows you to discover new wildlife, take part in quizzes and challenges, watch videos, find cool Augmented Reality surprises along the way too and learn how you can make a difference to your local community.

The new app is part of The Panda Made Me Do It, a WWF campaign to reward and encourage the most awesome pro-environmental behaviour. Neil Gunn, Head of Digital Strategy at WWF-UK said:

“This is the first time we’ve jumped into apps in a major way. We think that by combining the beauty of the natural world with the rich information available in the digital world, people might get even more out of their weekend trip to the riverbank.”

Now admittedly it’s a bit twee to spend your weekend wondering around looking at wildlife, but great if you want some fresh air (OK fresh may be a bit of a leap), a stroll through a different area or if you have kids to entertain, because they love nothing more than running around trying to spot hidden creatures. 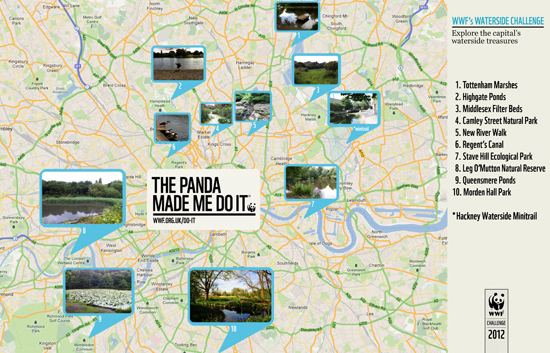 As The Waterside Challenge is a web app you can access it via iOS and Android devices, just visit wwf.org.uk/waterside for more information and it’ll work at ten special locations in and around London town, including Tottenham Marshes, Highgate Ponds, Middlesex Filter Beds, Camley Street Natural Park, New River Walk, Regent’s Canal and the Olympic Waterways Mini-trail that runs from Hackney Wick along the canal to the Olympic Park.