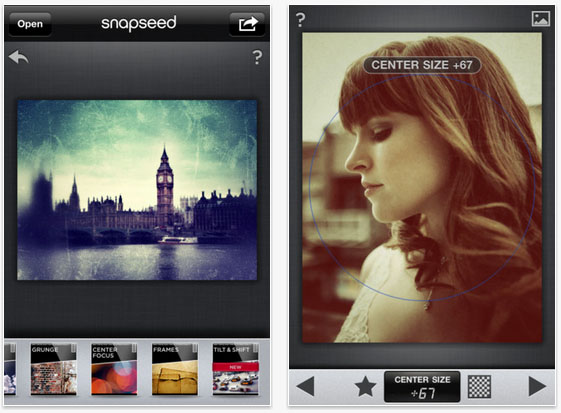 Despite the huge amount of innovative technology being used at the London 2012 Olympics this summer, a Guardian photographer called Dan Chung made headlines last week for taking all of his sporty shots using only an iPhone 4S and a handful of accessories.

Although the photographer probably had access to hundreds of state-of-the-art cameras for the event, we weren’t surprised he chose to use Apple’s latest handset, because it’s more than capable of taking great looking images, certainly makes for an interesting challenge and of course gives his brilliant photos even more exposure.

However, as self-confessed app lovers here at Shiny Shiny, we were even more interested in the fact Chung used photo app Snapseed to tweak his images after taking them.

So we decided to put Snapseed to the test to see if it’s really worthy of the Olympics.

Some photo apps have pages and pages of actions buried deep inside confusing menus. However, Snapseed just has a simple menu bar running along the bottom of the screen, which includes basic editing features, such as ‘crop’, ‘straighten’ and ‘brightness/contrast’, alongside a number of different filters, including ‘grunge’, ‘drama’ and ‘vintage’. There are then a few more advanced options at the far right of the menu bar, like ‘frames’, ’tilt-shift’ and ‘centre focus’.

The great thing about Snapseed is that you have complete control over each editing option and effect. It’s not an Instagram-like experience that allows you to pick a filter and expects you to live with it, you can tweak everything to your heart’s content, adjusting the likes of frames, brightness, contrast and the intensity of the effect.

Filter lovers won’t be disappointed, although it may look like you only have a limited number to play around with, if you pick the ‘vintage’ effect you can stick with that initial option or delve a little deeper and choose between different styles under that label, they all look decidedly vintage but have distinct differences too.

Snapseed makes full use of the iPhone’s multi-touch screen, because to make changes to your images you swipe from left to right or up and down.

You can choose which elements are being adjusted by each gesture, but because that sounds a little confusing to a newbie every screen has an optional overlay as well, which clearly explains how to get started.

It seems developers now recognise that some users like to tweak their photos in a variety of apps, cherry-picking the best features from each, whether it be a border from there or a particularly awesome tilt-shift effect from here. So once you’ve finished playing around with your image using Snapseed, you can send it directly to the likes of Picfx, MagicHour, Lo-Mob, Camera+ or ColorSplash, which just so happen to be some of our all-time favourite photo apps.

There’s always a ‘restore’ button in the top right of the screen (it kinda looks like a mini photo), which shows you what your main image looked like before you started messing around with it.

There’s online help and tutorials if you’re struggling with the app or want to learn more about applying different techniques.

Snapseed doesn’t do anything particularly special that you wouldn’t find in any other comprehensive photo editing app, like Camera+ or Lo-Mob. It’s got a selection of great filters and most simple editing tools, but it’s the way these are packaged up in such an easy-to-use interface with a single menu bar along the bottom that makes it really stand out in a sea of over-complicated options.

Those with more experience of photo apps who want to be bombarded with lots of different features and choices for their final images can delve deeper into each effect and tweak away, but it’s rare that you’ll find a photo application like Snapseed that’s just as suited to beginners too.

So yep, we understand your choice Dan, Snapseed is worthy of the Olympics and would probably win a well deserved silver medal…

Check out Dan Chung’s Olympic Smartphone Photoblog over on The Guardian.