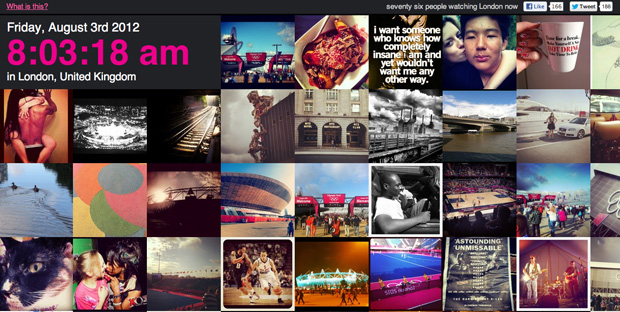 A very cool and slick new web app called This Is Now collects real-time photos from Instagram and displays them on websites dedicated to big cities across the globe. We’re going to warn you in advance that you’ll be pretty damn mesmerised, so look away now if you don’t have at least a few minutes to spare…

This Is Now is actually a network of different web apps, which are all tapping into Instagram’s API in order to stream photos from certain locations in real-time. Right now there are dedicated sites for London, New York, Sydney, Sau Palo and Tokyo.

Once you’re on the city of your choice you can watch photos scroll past you as they’re uploaded to the app. If a photo takes your fancy you can click on it before it whizzes off into the ether, where you can like it, comment on it and even find out the user’s name so you can go follow them later.

The sites use the geolocation data that Instagram stores whenever you take a photo, so even if you upload something when you’re back from a trip to New York, it’ll still appear on that website.

What we love most about This Is Now at the moment is that the London real-time feed has a fair few photos of the Olympic stadium and even some sports from inside, which we imagine there’ll be more and more of as the games progress.