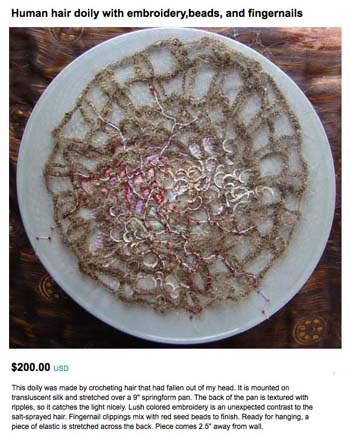 So bad news this Monday morning guys, not only has the Olympics come to a close, but it turns out you can no longer sell whatever the hell you want on Etsy anymore. That’s right, even if you’ve got some homemade poison, a spare skull laying around or a tank of lighter fluid that you were hoping to flog on the crafty site, it’s unfortunately now all prohibited.

Etsy has updated its DOs and DON’Ts of Etsy page, adding a whole host of weird and wonderful things to the Prohibited list. The most recent additions include body parts, tobacco and other smokeable products, drugs, drug paraphernalia and hazardous materials, like poison, mercury and fireworks.

Now if you thought Etsy was just dedicated to rubbish embroidered cushions and friendship bracelets you’ll probably be a little shocked to find that a select bunch of nut-jobs were actually selling the above regularly on the site.

However, don’t fret internet because it turns out only a few body parts have been added to the Prohibited list, like organs, skeletons and bodily fluids, but you can still get hold of crafty crap made from teeth, nails and hair, like this delightful human hair doily with embroidery, beads and finger nails that was featured over on Regretsy recently.