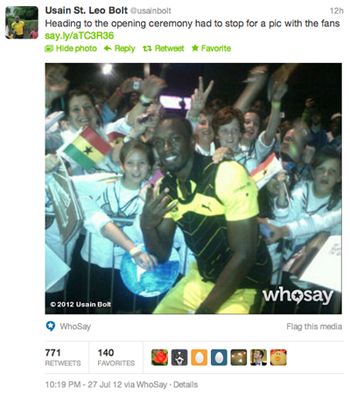 After last night’s spectacular opening ceremony even the most cynical characters are now excited about the Olympics (or at least they should be!). There are all kinds of ways you can keep up with the games, just check out Tech Digest’s round-up of websites, TVs, apps and set top boxes, but for behind-the-scenes insight, ranting and lots of different opinions you really can’t beat Twitter.

There are lots of athletes crazily tweeting away already, but here are just 20 of our top suggestions from current Olympians to former athletes and big news publications.

Follow Rebecca for behind-the-scenes tweets about what she’s up to, as well as a light-hearted commentary of the games. We love the fact she got just as excited as us when the Queen and James Bond shared the screen last night and that she hasn’t stopped tweeting because of the silly online trolls that have been hounding her recently.

His bio reads “The most naturally gifted athlete the world has ever seen”, which may seem a little arrogant, but we’re not going to argue with him. He tweets regularly, shares a lot of photos and is bound to be interesting to follow due to the fact he’s set to be one of the biggest stars of London 2012.

3. Tom Daley @TomDaley1994
Lots of fun and honest tweets from the talented diver, only follow if you like exclamation marks though…

The US hurdler is often cited as a great athlete to follow on Twitter because she often writes in an honest, open and laugh out loud way.

US swimmer Michael Phelps tweets to his fans, his fellow athletes and shares a lot of great photos from his life and training.

We haven’t heard from Jessica Ennis in a few days, but as she played such a huge part in the ceremony last night we’ll let her off. Follow her if you’re a fan and want to know what she’s up to and how her training is going through her honest tweets.

Cyclist Mark Cavendish shares a lot of tweets about his life and training that are often hilarious. He tends to tweet a lot of photos as well and talks candidly about how he feels before a big race.

Former athlete and now Olympic ambassador Kelly Holmes is a prolific tweeter and has so far shared behind-the-scenes info, photos, facts about the games and is interacting with athletes, celebs and fans alike.

Gold medal winner Matthew Pinsent has already been tweeting a lot about the games, sharing photos and showing his support for Team GB.

The official Twitter account for the London 2012 Olympics with a range of information, scheduling details, photos and opinions.

The Twitter account for the BBC’s coverage of the games, which has so far included results, links to bigger stories and a lot of re-tweeting of other accounts, athletes and pundits.

Funny man, author and all round nice guy David Walliams is a sports enthusiast and has already been tweeting a great deal about the Olympics, his opinions and the opening ceremony.