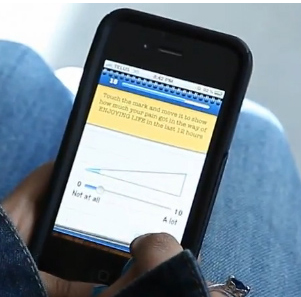 Many of the health and fitness apps that we review over on our sister site Connected Health employ gaming techniques (or gamification) to encourage people to fill out more information about their bodies, beat personal best times and scores when they’re working out or just log-in and promote the app more often.

Whether you’re set on working your way up a leader board, trying to get a badge or unlock some extra content, the success of these apps (and how excited we get about them) goes to prove that we all love playing games, we love competition and we love a good challenge.

The latest app to employ game mechanics in an innovative way, which seems to be successfully altering behaviour, is called Pain Squad and it’s been developed in Canada to encourage young people with cancer to track their physical and emotional well-being on a regular basis.

The Hospital for Sick Children (known as SickKids) in Canada launched the app in an attempt to make tracking patients’ health much more appealing. Young children with serious illnesses often find it hard to regularly fill out forms and talk about how they’re feeling, but feedback and constant updates are exactly what doctors need to ensure they’re getting the right kind of care.

The Pain Squad app motivates children to record how they’re doing by pretending they’re working for a police force that’s hunting down pain. The patients have to fill out a daily questionnaire, which asks a range of questions about their pain, where it is and how they feel generally. The more they fill out this kind of information the more they can work their way up the ranks of the police force.

According to Springwise, the app has been successful so far and as well as encouraging children to fill out important information, we wonder whether it’ll have a positive psychological impact too to imagine pain being tracked down and stopped in its tracks?

We’ve seen gamification being used in an attempt to encourage people to eat more healthily and take part in exercise challenges, but it’s great to see it proving successful to help those with serious illnesses and conditions too.