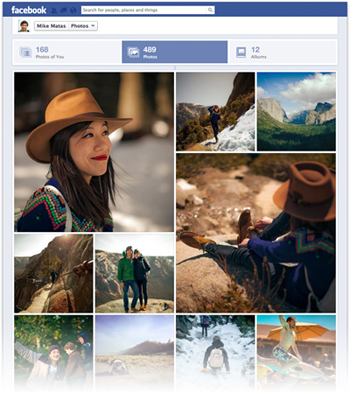 Facebook has taken a leaf out of Pinterest and Tumblr’s book and will be rolling out a brand new look for photos over the next few weeks, which it claims will be “more beautiful” and “make viewing photos more enjoyable”.

The changes will mean that your photos no longer neatly sit side-by-side one another below all of your albums, but instead they’ll stretch to fit the whole screen. You can showcase the ones that make you look awesome by highlighting them in the same way you can draw attention to certain pieces of content on your timeline.

The new layout makes a lot of sense, because instead of seeing albums followed by photos you’re tagged in there are now just three tabs, “photos of you”, “photos” and “albums”. After all, it’s only the elite stalkers who really bother to browse through albums anymore, right?

Some users are noticing the new “mosaic” layout right now, but we expect you’ll all start to see it over the next week or so.