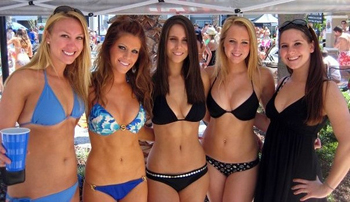 Most of us have fallen victim to the fugly Facebook photo tag at some point in our lives, but why oh why did your good ‘friend’ really decide to do it? Well, we hate to break it to you, but they may have thought your clothes looked nice, that you seemed like you were having fun OR they might just not like you that much…

Although we thought we left playground bitchiness back in our teens, a recent study suggests that many female Facebook users are becoming increasingly catty by deliberately tagging unflattering photos of their (supposed) friends.

According to the research commissioned by MyMemory.com, a quarter of the 1,512 women polled admitted to having purposefully uploaded a gross photograph of a friend in a bikini. An even bigger 45% said they upload unflattering outfit shots all the time and 41% decide to tag when someone hasn’t got make-up on. Oh how very Regina George.

OK, so why are we doing this to one another and acting out scenes from Mean Girls?

Well, 51% admitted that they did it because they didn’t like the friend in question (not your friend then, love) and 32% claimed someone had done the same to them so saw it as a form of revenge. However, 65% would be angry if someone uploaded an unflattering photo of them. Hmm talk about double standards.

We’re not sure what we think of the slew of “women do this” and “girls are so inclined to do that” stats that we’ve been coming across recently. We certainly don’t want anyone reading this to scroll back through the photos they’ve recently been tagged in and start accusing people left, right and centre of being evil in some self-perpetuating cycle of pure hatred.

However, maybe it IS time we all started being a little nicer online, considerate to one another on Facebook or just stop posting holiday photos altogether. Some of us aren’t going abroad this year you know.