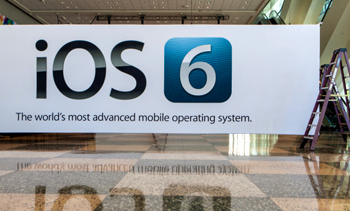 We were surprised to see that the new MacBook Pro announcements didn’t overshadow Apple’s software developments, as iOS 6 comes packed full of cool new features and updates. Here are a few of the most important changes we can expect to see:

Siri gets a revamp

Despite the fact Siri is a pretty ground-breaking feature, no one can deny there have been a LOT of issues with Apple’s elusive voice activated assistant since it was launched last year.

So, it’s exciting to see a whole raft of new changes are being introduced with iOS 6, such as integration with sites like Yelp and Rotten Romatoes for better restaurant and movie reviews, the ability to tweet just by talking to your phone (this could be VERY dangerous/annoying), lots of new languages added, a better understanding of sports with game summaries and stats and finally Siri will be coming to the new iPad too. It’s about time.

We’ve heard rumours for months now that Apple has been busy working on its own mapping solution and it finally arrives with the iOS 6 update.

So there’s not that much to report on here, it’s not like there was a way to blow Google out of the water. A map is a map after all. However, the interface looks a little different and there are some cool new features, such as local search information, live travel updates, business profiles and custom mapping.

It looks like Apple will be competing with Google in a big way when it comes to mapping as it’s already experimenting with 3D views of interesting sites, just like the big G.

You’ll be able to have both “VIP” and “Flagged” mailboxes, which will make sorting through all of your emails much, much easier.

We’ve seen this kind of integration with Twitter in iOS 5, but now Facebook gets a piece of the action too.

We also love the fact that events and birthdays will automatically sync up to your iPhone’s calendar too, which is a welcome touch (assuming you don’t hate all of your Facebook friends of course).

“Do Not Disturb” mode

The new “Do Not Disturb” mode will be a way of collecting all kinds of notifications until later. So you’ll be able to read your messages, emails and see any calls as soon as you switch “Do Not Disturb” off, but while it’s on you won’t be irritated by anything at all.

There are some interesting and necessary settings for the new mode too, which will allow you to let certain calls or repeated calls through to you.

Facetime will be able to run via 3G and 4G connections after the update and you can choose which device you’d like to answer your calls on.

When browsing the web with Safari you can save pages to an offline reading list, which will make the whole experience similar to the likes of Instapaper.

Do more with your photos

Passbook keeps all of your important things safe

Passbook is kind of like an app that’s designed to keep all of your important ticket information, passes and other bits of valuable information safe and sound. So keep your Starbucks balance, flight details and movie tickets all under one super safe umbrella. Unless you lose your phone of course…

OK, I NEED it now

We know, we know, they’re a pretty impressive set of changes, right? We’re pretty sure it’ll feel like you’ve got a completely new phone in your hand. But, you’re going to have to wait a few months as developers will have access to iOS 6 today, but regular users won’t be able to get their grubby mits on it until the autumn.

iOS 6 will be available for the iPhone 3GS and later (sorry if you’ve still got a 3G, sort it out though, yeah?), as well as 2nd and 3rd generation iPads and the 4th generation iPod Touch.