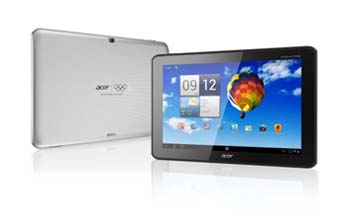 Today Acer has launched its new special-edition Olympic tablet, the Iconia A510, which comes with a pre-loaded Eurosport Player for sports fans to enjoy watching the action from the games in full HD.

The device is running Android Ice Cream Sandwich OS, has 15 hours of battery life, powerful quad-core performance and can handle HD videos, gaming and fast web browsing, so it’s pretty capable to say it’s being marketed purely as an Olympic tablet. When it comes to storage the tablet has 32G, which can be expanded by an extra 32G (to 64G) by SD card too.

Eurosport Player is embedded into the device, so you can have instant access to Olympics-based content on-the-go. But, it’s worth noting that it’s only for a trial period until the 13th of August, after then you’ll have to part with your pennies if you still want to access the latest sports content.

We’re not sure how successful the new device will really be in the wild, especially with the arrival of the Microsoft Surface tablet and a range of other tablet PCs that are set to shake up the market. However, the decent price tag and Eurosport Player integration is bound to entice some sports fans who have been looking for the right moment to purchase a tablet.

The Acer Iconia A510 is available from Carphone Warehouse now for £349.