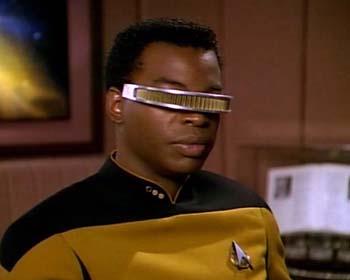 A kind of advanced technology used to help robots navigate their way around without bumping into everything could soon be used to help blind people see again. Well, kind of.

Scientists at the Institute of Intelligent Systems and Robotics at the Pierre and Marie Curie University in Paris are currently developing a special pair of glasses that are able to use a range of sensors to produce 3D maps of a wearer’s surroundings.

The glasses, that the team revealed to the world at a conference at the Massachusetts Institute of Technology, use two main cameras to create 3D maps of different environments. A number of accelerometers and gyroscopes are then able to keep track of a person’s location and speed in that environment and all of the information is processed and displayed onto an electronic Braille device in the form of a tactile map.

Edwige Pissaloux, who’s heading up the team in Paris, said:

“Navigation for me means not only being able to move around by avoiding nearby obstacles, but also to understand how the space is socially organised – for example, where you are in relation to the pharmacy, library or intersection.”

According to New Scientist, the glasses are able to generate more than 10 maps per second, so a blind person could easily travel at a normal walking pace with the aid of the tactile device without encountering any problems. Although the glasses won’t really allow blind people to ‘see’, they will give them much more freedom in the long run.

One thought on “New glasses could help blind people see again, kind of”