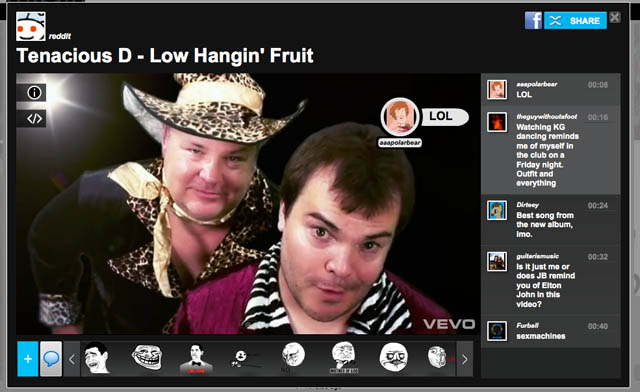 New video platform Mixin has launched today, with more than 20,000 users already under its belt and a unique offering that allows you to merge videos, comments and memes all in one place.

Popular video sharing platforms like YouTube and Vimeo have become more and more advanced over the years, but it’s safe to say that comments often feel a little detached from the video content, as they sit at the bottom of the page in a long list. This is the problem Mixin aims to solve. The Cailfornia-based company has been set up to allow users to add personal comments and images to online videos, which they can then share to their social networks.

Have a quick browse of the videos on Mixin’s home page and you’ll see how the comments work. They appear in a list at the side of each video, but they’re assigned to a specific time so pop up when you reach that point, a little like Soundcloud, but more distracting.

The social element is key to Mixin, it’s not just about scrawling comments on videos, but sharing them directly to Facebook. This way you can see the videos that have just been created by your friends or look at those from the wider community if you want to. This makes much more sense, as comments popping up from people you don’t really know can be a little irritating, but if you have shared connections and mutual interests it’ll presumably be a much more valuable experience. Probably.

According to Venture Beat, Mixin has been gathering users quietly and will be opening to the wider public and unveiling its white label offering to other sites today. The first external sites to start using Mixin’s technology include AnyClip and Viumbe, who will be integrating the system into their own video players.

“Most online video is all about searching and algorithms with some minor social features tacked on.

“Mixin’s technology starts with social interaction as the foundation so that videos serve as a way to connect friends and increase sharing. The customization, commenting and posting to Facebook allows users to add their personal stamp and humor to the videos they love.

“Now we are able to add this functionality to partners which means any content owner looking to add to video engagement and sharing can use our ‘next generation’ commenting as a solution.”

We can see how merging comments with video content makes watching all kinds of clips into a much more social and arguably enjoyable experience. However, we’d rather just see the things our friends have written, as watching a video with the angry, offensive comments we’re so used to seeing on YouTube wouldn’t be a pleasant experience AT ALL.