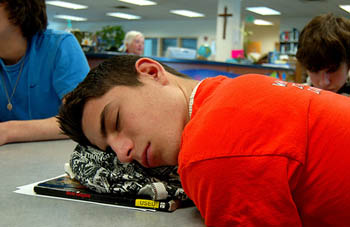 We’re pretty sure most people reading this will have fallen asleep at school or university before, whether it’s because you had a particularly boring teacher or drank a little too much free alcohol during fresher’s week.

Well now researchers at the University of Wisconsin-Madison are working on a robotic teacher that will detect when pupils are snoozing and employ a range of methods to ensure that they stay alert. Initial tests have suggested that the robot can’t shake students that refuse to pay attention, but it does boost how much they remember of their lessons afterwards.

The device, known as the Wakamaru humanoid robot, is effective because it not only monitors students’ attention levels, but then uses this data to mimic teachers in order to hold their attention. It already knows how to change the pitch or tone of its “voice”, make arm gestures and a range of other tactics to ensure it’s as entertaining and interesting as possible.

According to New Scientist, Bilge Mutlu and Dan Szafir at the University of Wisconsin-Madison tested the robot on a number of pupils recently:

“The pair programmed a Wakamaru humanoid robot to tell students a story in a one-on-one situation and then tested them afterwards to see how much they had remembered. Engagement levels were monitored using a $200 EEG sensor to monitor the FP1 area of the brain, which manages learning and concentration. When a significant decrease in certain brain signals indicated that the student’s attention level had fallen, the system sent a signal to the robot to trigger a cue.”

They repeated the test on different groups of students and those that received a cue from the Wakamaru (catchy, huh?) were much better at recalling details from the story than others who were left to use their own tiny brains all on their own.

Of course the robot isn’t just designed to stop students nodding off, but it ensures they stay as focused and engaged as possible, which could have big implications for those working in any kind of educational setting. A similar system could also be employed for those who learn online and have even less reason to not fall asleep, get distracted or start stroking their cat at their desks.