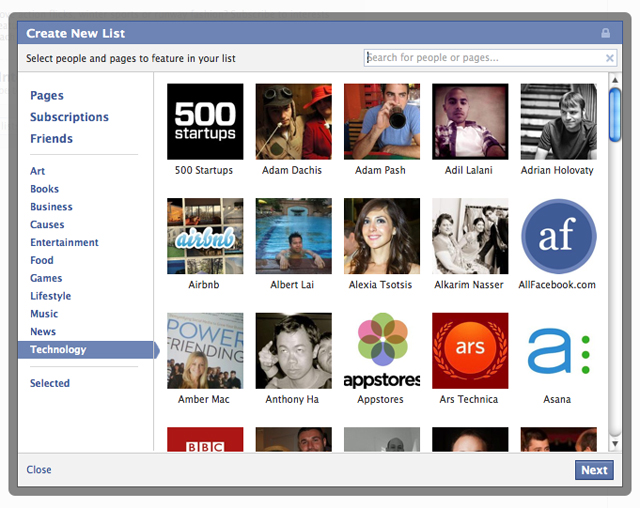 Today Facebook has introduced a new feature called Interest Lists, which makes the network seem much more about social discovery than obsessively stalking your ex.

If you log-in to Facebook this morning, chances are you’ll be greeted by a pop-up explaining that you can now create and subscribe to Interest Lists.

The box at the top of the add lists page reads:

“Keep up with your interests. Love action flicks, winter sports or runway fashion? Subscribe to interests featuring experts, pages and celebrities — and get a special news feed for each topic.”

As you’d expect, the new feature is a way for users to keep track of certain subjects, groups or pages and the topics include things like Arts, Entertainment, Lifestyle and Technology.

You can create your own lists of pages and people that tend to say the most interesting things and other users can then subscribe to them, so it works in a very similar way to Twitter Lists and makes us think of social discovery apps and services, like My Taptu and Flipboard, as well.

Once you’ve created, browsed or subscribed lists will appear on the left-hand side of your news feed, and then top stories from each will pop up alongside updates from your friends.

There’s obviously a lot of potential for brands here, if your page is included in a pretty high profile list, you’re onto a winner. However, normal users need to be wary of how many lists they subscribe to and how many pages are in each list so they don’t suffer from a serious case of social media overload.

Although the new feature is similar to Twitter’s Lists and Google+’s Circles, it’s a very interesting addition to the social network, making it a place to discover interesting social content hand-picked from a range of sources. But, is that really what we want from Facebook?

There are plenty of services out there that curate the most interesting content from our Twitter, Google+ and Facebook friends, so the benefits of having this feature within Facebook itself just means there’s one less place to look and one less app to open every morning. We imagine some will stick to what they know and continue to use an RSS reader or social discovery tool, other users may now migrate to Facebook and some that didn’t even know tools like Flipboard existed may now be more inclined to follow topics they’re interested in.

So do you think Interest Lists fit well within Facebook? Or are we going to go elsewhere for social discovery and keep Facebook for silly updates and drunken photos?