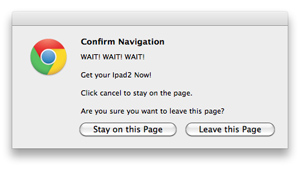 Well now it seems that these kinds of websites will be forced offline more in the future as the owners of ‘Wikapedia.com’ and ‘Twtter.com’ have been fined more than £100,000 each, as they’re currently using the sites to advertise fake iPad and MacBook competitions. Tut tut.

According to The Next Web, the fines were handed out by PhonepayPlus, a company responsible for regulating premium rate telephone services (PRS):

“These ‘squatted’ sites informed consumers that they had won or could claim a prize, such as an iPad. In both cases, consumers were given the impression that to enter or claim they simply had to enter their contact details and answer some questions.”

It was revealed that if consumers then handed over their details they’d end up being sent a text, which charged them £1.50. Then, if they replied they’d be charged more and more. Apparently one person was charged £63 in total, having not realised it was a scam.

It’s good to see a company taking action against these kinds of websites, we just hope it sets a precedent for future cases.

One thought on “Typosquatting sites are fined more than £100,000”