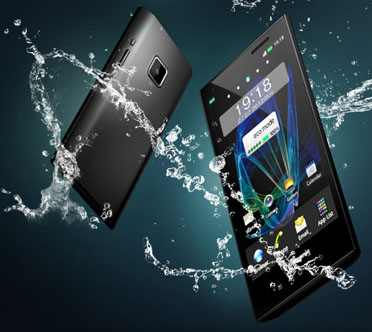 Panasonic has unveiled a new smart phone for European markets, strangely named ‘The Eluga’, which sounds a bit like the beluga whale or some kind of cheap perfume, but in fact comes from the phrase ‘elegant user-oriented gateway’. Fancy.

The official Panasonic Twitter account revealed details of the phone earlier in the week and this morning provided a highly-anticipated update on its News Portal.

The phone is described as a “high specification waterproof smartphone for the style conscious”, meaning not only is it slim with a 7.8mm profile and light weighing in at 108g, but it’s protected for up to a depth of 1 metre for up to 30 minutes in water.

In terms of specs, the Eluga is a pretty capable smart phone, it’s running Android Gingerbread (with an update to Ice Cream Sandwich coming in the summer) with 8GB of memory, a 1GHz Dual Core Processor and an 8MP camera.

It also has a tonne of cool built-in features, like NFC capabilities, Swipe and Share, which lets you watch content on other devices and ‘eco mode’, Panasonic’s new power-saving technology.

The Eluga is set to go on sale in Europe in March, but we’ll keep you post about the exact date and pricing details.