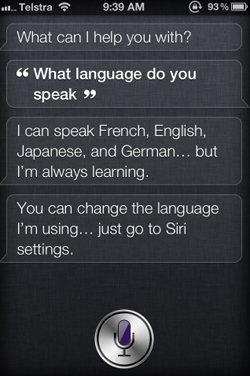 Chatty voice recognition assistant Siri may have accidentally said a little too much this time, according to a screenshot on 9to5Mac, which shows she plans on widening her language skills and learning Japanese. How clever.

For a while now we’ve heard rumours that Apple has been set to launch the handy speech recognition tool in Mandarin Chinese, Russian and of course Japanese, which it appears to be well on its way with now. The Apple enthusiast site also suggests the added language (or languages) could be revealed at what we’re all assuming is an iPad 3 announcement next month.