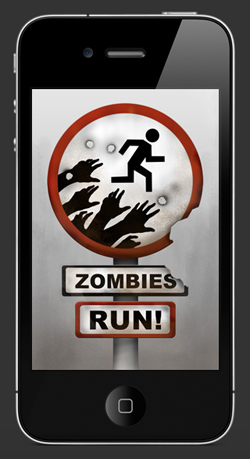 There are lots of mobile apps on the market designed to keep us motivated, track our runs and spur us on to beat that personal best time. We’re big fans of Nike+ GPS because it’s so simple to use, the interface is intuitive and the GPS tracking really accurately records your runs. However, if you find it hard to workout then a simple app might not motivate you to get down to the gym or out onto the roads, which is where Zombies, Run! comes in, a crazy (but very clever) new running game for your mobile that’s guaranteed to have you running as fast as you can…

The basic premise behind the new game is that zombies are chasing you, so you’ve got to run as fast as you can to get away from them before they (presumably) maul you. The game, which will be available for the iPhone, iPod Touch, and Android, delivers the scary zombie chasing story straight to your headphones and gives you orders and voice recordings to make it all the more realistic. How. Creepy.

The story is very similar to the likes of 28 Days Later or I Am Legend, you’re running for your life away from zombies and creating a little den at home with supplies and the random food you can find. You can automatically collect these all important items, like medicine and ammo, as you’re running around, so it’s like you’re inside a video game the whole time.

The great thing about Zombies, Run! is you don’t have to sprint away outside (even though the game will make you want to) you can use it on a walk or on a treadmill too, but it won’t be as authentic, obviously. Although listening to the audio is central to the whole game, you can also set your own playlist to play too in between the scary bits.

The game also keeps track of all the more important and serious stuff, like distance, time, pace and the calories you’ve burned. All of that info can then be synced with RunKeeper, so there’s a central place to keep track of your runs, which is great if you get into Zombies, Run! but don’t want to have to descend into a world of flesh-eating monsters every time you go out.

There are all kinds of examples of clever technology being used to transport us into exciting games as ways to motivate us to work out and keep us entertained, but there’s just something so hilarious, terrifying and genius about Zombies, Run! that has us convinced it’s going to be very, very popular.

Zombies, Run! isn’t available quite yet, but you should be able to get your hands on it at some point in the next few months. We really can’t wait!