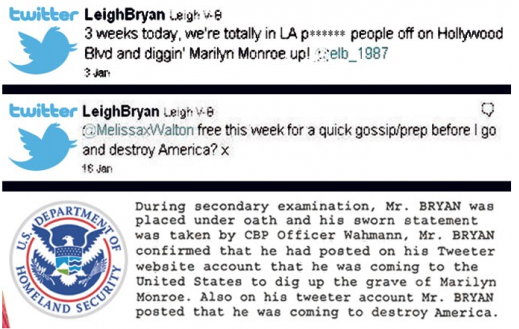 We know that social networks are closely monitored by authorities and that innocent tweets have been misconstrued as threats more than once in the past. Just take a look at the case of Paul Chambers, who was convicted for tweeting about blowing up Robin Hood airport back in 2010.

So although it may seem insanely over-the-top, it comes as no surprise that a pair of friends have been barred from the US for joking about “destroying America”. According to tabloids here in the UK, the pair called Leigh Van Bryan and Emily Bunting were detained at Los Angeles International Airport, quizzed for hours, locked up in a cell overnight and then sent back home.

“Free this week, for quick gossip/prep before I go and destroy America”

The term “destroy” is obviously slang for partying here in the UK, but US officials didn’t seem to buy that excuse at the time…