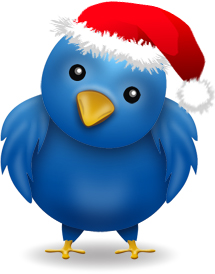 Although using social media can be a great way to catch up with friends and switch off, many of us use it as part of our jobs, so it can sometimes feel a bit too much like work to tweet and update and snap filter-y photos when we’re trying to get away from it all and have a holiday.

So how many of you will be having a social media blackout this Christmas?

Well according to stats from Sky over the past few years, people are less likely to be online over Christmas but do love to watch TV. No surprises there really, we like to replace mundane tweets with mundane TV.

Sky Broadband reports that both Christmas Eve and Christmas Day have 27% lower peak traffic than on an average week day, and the total data downloaded is 20% lower than an average weekend day, which means it’s usually the internet’s quietest period of the year.

In contrast, figures from Sky TV show that we remain a nation of TV lovers during the festive period, with Christmas Day being the most popular day of the year in terms of watching the telly.

It’ll be interesting to see whether these stats change year upon year as more people give internet connected gadgets to one another, or as watching content online as a family becomes even more popular.

One thought on “Will you be having a social media blackout this Christmas?”