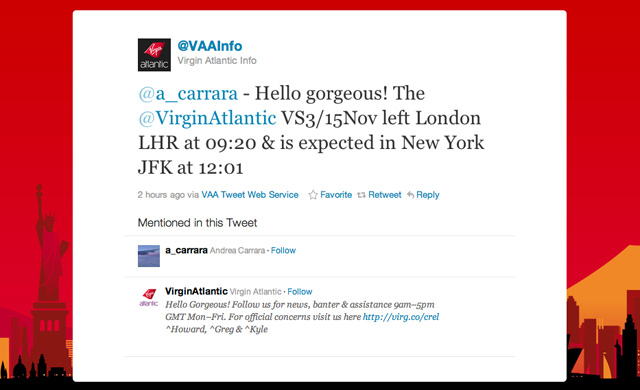 Virgin Atlantic has launched a new “tweet bot” service this week, which will allow Twitter travellers to find out more information about their flights via the social network.

All you need to do in order to use the service is tweet your flight number and departure date to @VAAInfo. The bot will then tell you what time you can expect it.

Fergus Boyd, the head of e-commerce at Virgin Atlantic, said:

“We now have over 50,000 Twitter followers worldwide and we know that many of them use the social network to keep abreast of travel news and updates. We are finding that many travellers are using the tool simply to confirm when their flight departs and others to check details when picking up friends and family from the airport”.

He also raised the interesting point that during times of travel disruption the service will be invaluable for many confused travellers who don’t want to complain or rant, but just desperately want to find out when their flight is due. Boyd added:

“This service, although used by many on a day to day basis, will really come into its own during times of disruption when we get high peaks of customer queries, many of which are simply asking for an update on the status of their flight.”

Although this is the first time a major airline has used Twitter to give passengers real-time travel updates, a London-based Twitter service called @whensmybus is proving to be really popular and works in the same way.

It’s interesting to see these two very different services use the same mechanic to give us instantaneous travel updates. Not only do they give frustrated travellers super fast information, but they make the whole process much easier too, particularly if you’re always on Twitter and don’t want to have to switch over to another service to find what you’re looking for. In many ways you could argue this is a testament to just how lazy we’re all becoming, but in another it just makes complete sense and most importantly takes the stress out of travelling, so there’s no need to obsessively check timetables, ask strangers when to expect the next bus or mutter to yourself in frustration.